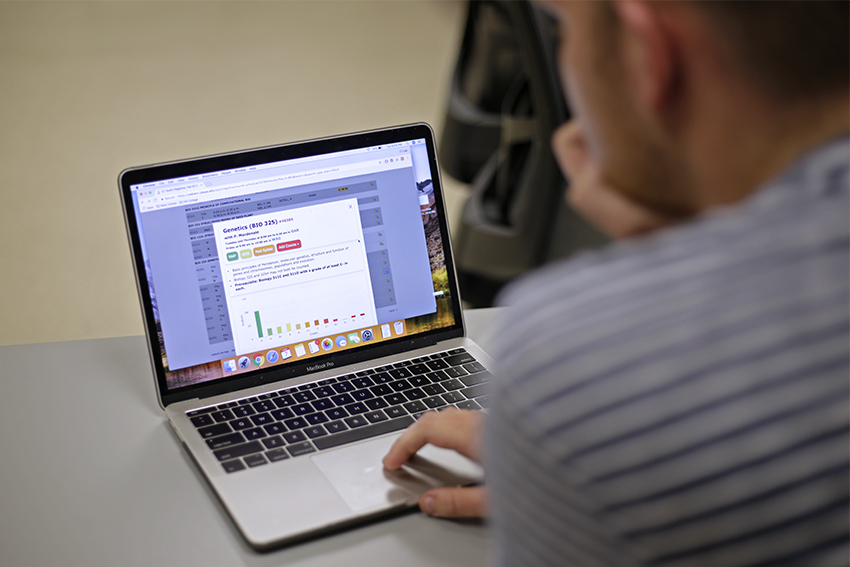 Computer science sophomore Sriram Hariharan has always had a hard time registering for classes. So to make it easier, Hariharan developed an extension for Google Chrome called UT Registration Plus.

“It’s really annoying for me to go through (registration),” Hariharan said. “I’m pretty sure for a lot of people it’s that way. This last semester, I just got so annoyed that I was like, ‘I’m gonna make something that makes it better.’”

For each course in the UT’s course schedule catalogue, links are provided to the RateMyProfessor and eCIS evaluation pages for that instructor, as well as syllabi from when the professor taught the class in the past, through the extension. It also gives users the course description and highlights things such as prerequisites and restrictions.

The extension shows an average graph for the distribution of grades students have received in the past. It also lets users save courses, and then highlights and crosses out what courses would conflict with the saved ones.

“I want it to help people with registration, streamline the process and take out a lot of the headache from finding courses,” Hariharan said.

The extension was just rolled out on July 23 and already has nearly 700 users, Hariharan said.

Krishna Chittur, a computer science and mathematics senior, is one such user.

“Overall, it’s a massive timesaver,” Chittur said. “Usually if something is missing, it’s not the extension’s fault. … Sometimes, UT doesn’t have the syllabus for a course, and oftentimes, a professor won’t have a RateMyProfessor page.”

It took Hariharan less than a month to make UT Registration Plus, all with little experience using JavaScript, an advanced programming language. Hariharan created it with no outside help, other than that from Google search results.

“I also wanted to use this to learn more about web development, and I didn’t really know JavaScript that well before this, so it took a lot of late nights googling and trying to figure stuff out,” Hariharan said. “I’m not like a genius or anything. I’ve seen this at other schools, but I didn’t see it at UT, so I thought it would be really cool.”

After creating the extension, Hariharan told a friend to post it in the UT ’22 Facebook group as a test run.

“I actually wasn’t planning on telling anyone about this until like the start of the semester … but I told one of my friends as, like, a beta test to just put it in the upcoming freshman Facebook group, just to see how it works with the people who are actually registering,” Hariharan said. “I went to sleep and it just blew up over night. … It had like a hundred uploads, it was crazy.”

Civil engineering freshman Singh Arwinder wrote a five-star review for the extension to express his gratitude.

“I usually don’t write reviews, but this app has made this registration process sOooOoo much easier,” Arwinder said in the review. “I felt the need to let everyone know how helpful this app is!”

Hariharan said he would love to collaborate with the University on making this a staple way students register, but has not put much thought into his next steps. Regardless, Hariharan said this is definitely going to go on his resume, and he wants to develop more products like this in the future.