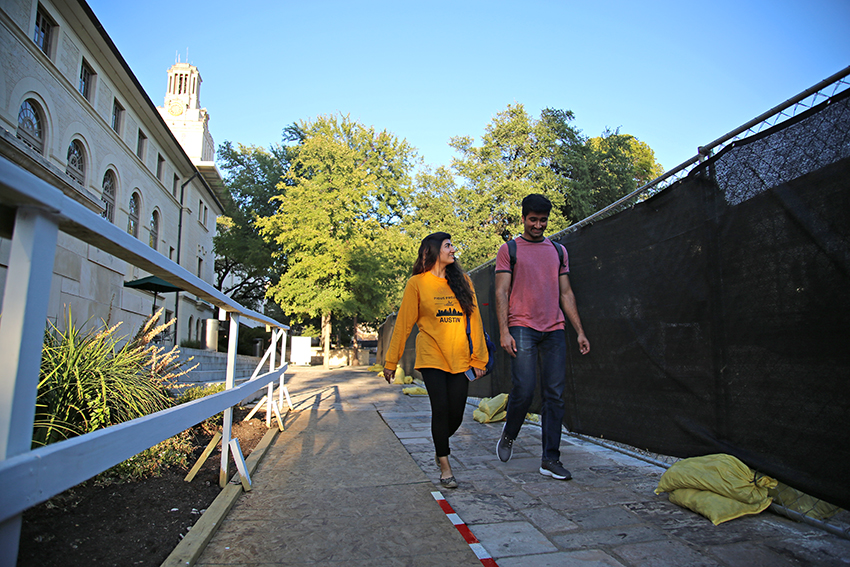 With every semester, some students prepare to come to campus for the first time and others prepare to leave, but one thing remains constant: campus construction. Most are smaller renovation projects such as repainting or adding new scaffolding to buildings, but others are more noticeable changes to campus.

“We have in the project management team four to five hundred projects active at any given point in time, so there will always be something that’s underway,” said Jill Stewart, project management and construction services associate director.

One recently completed project was new Student Activity Center patio. Started in 2013 and completed this June, the patio was built to fill out the space between the SAC and Gregory Gym to make it look more appealing.

Project manager Hirokazu Horikoshi said the area had drainage issues and wasn’t usable or functionable until Student Government designated a portion of tuition fees to go to renovating the area in 2013.

“The student body at the time wanted to make some improvements to the Student Activity Center, specifically the outdoor space,” Horikoshi said. “They wanted to make it more usable, which means increased seating, increased functionality (and) access to power, Wi-Fi and couple of other unique features.”

Across Speedway, Welch Hall has been undergoing significant reconstruction since June 2017. The current project removed asbestos and lead based paint from the building’s 1978 wing, the side of Welch facing Speedway. There are also plans to update the interior and add a small cafe.

Jim Shackleford, director of Capital Planning and Construction, the department that typically works on the larger projects on campus, said the hazardous materials in older parts of the building, such as the original 1929 wing, have already been removed and the project will be completed in January 2020.

“The purpose of the project was to update the project to serve the needs of the College of Natural Sciences, both in terms of the teaching they do and the research they do,” Shackleford said. “The building was built in 1978 and had not been significantly renovated in its lifetime, so it was overdue for renovation, and all of the equipment that was in the building was at the end of their service lives and needed to be replaced.”

On West Mall, the old fountain is being removed to make way for a sign intended as a formal gateway to UT’s campus. Construction began this July and is expected to be finished by December.

Stewart said construction services starts working on these larger construction projects over the summer to minimize disruption during the school year.

“Every summer, we always have large projects,” Stewart said. “We don’t always know what they are until we get into the fall and we start reviewing the requests and information about projects, so I don’t know what next summer is going to bring.”