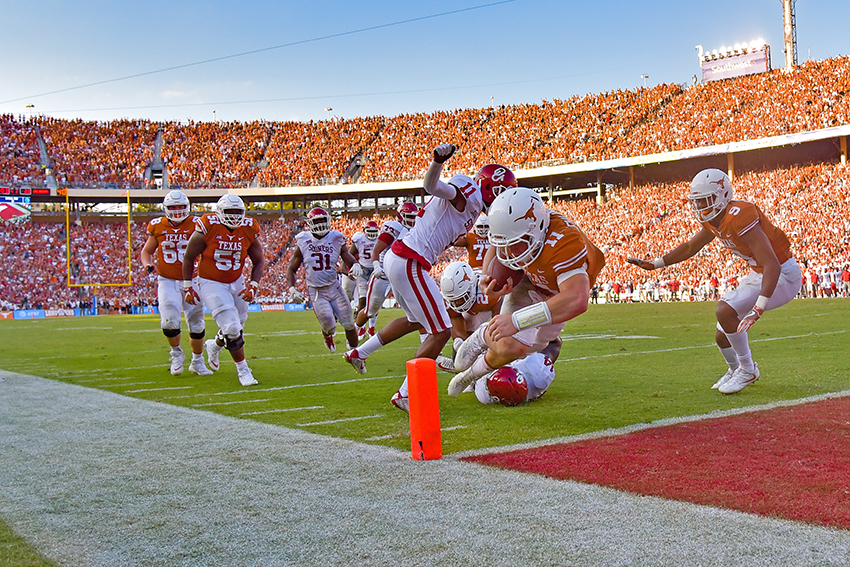 As the summer comes to a close, some of Texas’ largest sporting events of the year are now in sight. From Texas football’s highly anticipated rematch with USC to Longhorn volleyball’s date with the defending champion, No. 1 Stanford, there will be a healthy dose of much-watch games from now until the end of the semester.

Last year, head coach Karen Aston’s squad was seconds away from taking down their biggest opponent of the season, then-No. 1 UConn. Texas won’t get another shot at UConn during the season, but it will have a chance at taking down another juggernaut when it hosts Mississippi State.

Preseason polls place the Bulldogs at No. 8 with Texas a few spots behind them at No. 10. And if the Longhorns’ matchup with  the Bulldogs isn’t big enough, No. 9 Tennessee comes to Austin the very next week.

Baker Mayfield won’t lead the offense for Oklahoma, but the atmosphere in the Cotton Bowl on Oct. 6 won’t be any less electric. With the Sooners’ first-round MLB draft pick Kyler Murray opting to be their quarterback over pursuing a professional baseball career with the Oakland A’s, the Red River Rivalry will have no shortage of electricity.

With huge home games against USC and TCU along with a tough road game against Kansas State before Oct. 6, Texas won’t exactly cruise into Dallas.

If both teams can reach the Cotton Bowl with minimal damage, the Texas-Oklahoma rivalry could finally return to the national stage.

Head coach Shaka Smart’s fourth season won’t even be one month old when the Longhorns travel to Las Vegas to take on North Carolina in the semi-final round of the Continental Tire Las Vegas Invitational.

Texas hasn’t knocked off a top five opponent since its 84-82 buzzer-beating victory over the Tar Heels at the Frank Erwin Center in 2015. Three seasons later, Texas and North Carolina will meet again. This time it’ll take place at a neutral site.

It is worth noting that prestigious basketball programs UCLA and Michigan State will both participate in the tournament as well.

The Longhorns ripped off an undefeated record in Big 12 play, but Texas’ biggest challenge will come before conference contests. Texas is set to travel to Palo Alto, California, to take on the defending national champions in Stanford on sept. 11..

That’s not all. After this matchup, Texas and Stanford will then return to Austin for a matchup on Sept. 14 at Gregory Gym. This doesn’t seem efficient at all, but don’t complain. It’ll be fun.

The bad news is, if you don’t have tickets yet, you probably won’t get your hands on any unless you want to drop a decent amount of money to witness the Texas-USC rematch.

USC won’t show up with Sam Darnold, but Longhorn fans will still be looking for revenge after last season’s heartbreaking overtime loss at the Los Angeles Coliseum.

Texas should enter week three 2-0 with games against Maryland and Tulsa in the first two weeks, but we saw what happened last year. There is a strong possibility that USC could come to Austin with a loss after a tough road contest with Stanford set for the week before.

While having both Texas and USC take the field with a 2-0 record could bring College Game Day to Austin, this will be the biggest sporting event of the fall semester despite their records.