Early turnovers lead to victory for defense at scrimmage 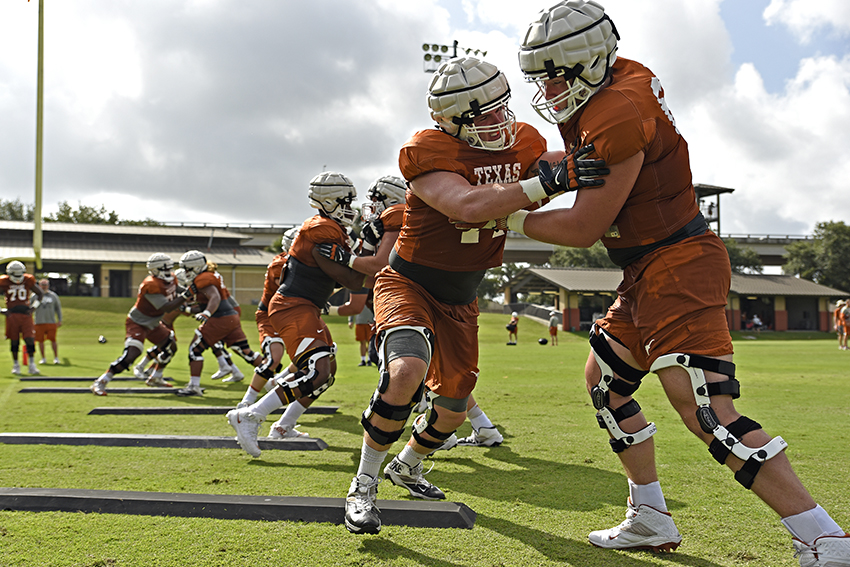 After two early turnovers during a Saturday morning scrimmage, the Longhorn defense left Frank Denius Fields with a victory over the Texas offense.

Here are the biggest takeaways from Saturday:

Head coach Tom Herman was honest during the post-scrimmage media availability: ball security is an issue.

Herman said an Anthony Cook interception and a John Bonney fumble recovery for a touchdown highlighted the defense’s win over the Longhorn offense.

While turnovers caused headaches for the offense, the defense is sounding dominant as usual.

“It’s great for the defense,” Herman said. “If we had no turnovers I’d be worried about the defense. You want to be somewhere in the middle. The ones that bother me are fumbles. That’s a choice you make to be loose with the football.”

Three freshmen saw significant reps Saturday morning: defensive back Caden Sterns, running back Keaontay Ingram and DeMarvion Overshown. Sterns has been receiving reps with the first team while Overshown has received reps at linebacker, but Ingram running with the ones was the biggest news.

The starting running back spot is still up for the taking. Herman broke down one of the candidates, sophomore running back Daniel Young, after the scrimmage.

“Daniel is the kind of guy, he doesn't do anything that will wow you but he does everything really good. That’s really good,” Herman said. “You’ll see a guy that is stronger last year, break a few more tackles than he did last year. The biggest thing is he’s comfortable with back-to-back years in the same offense.”

Herman later said he does have one back who has that wow factor, though. It’s the freshman.

Grad transfer Tre Watson is still in the process of returning from an ACL injury and will be evaluated again Monday. If he is cleared, he is expected to be right in the mix.

Texas takes its NCAA-mandated day off on Monday but will return to practice on Tuesday.