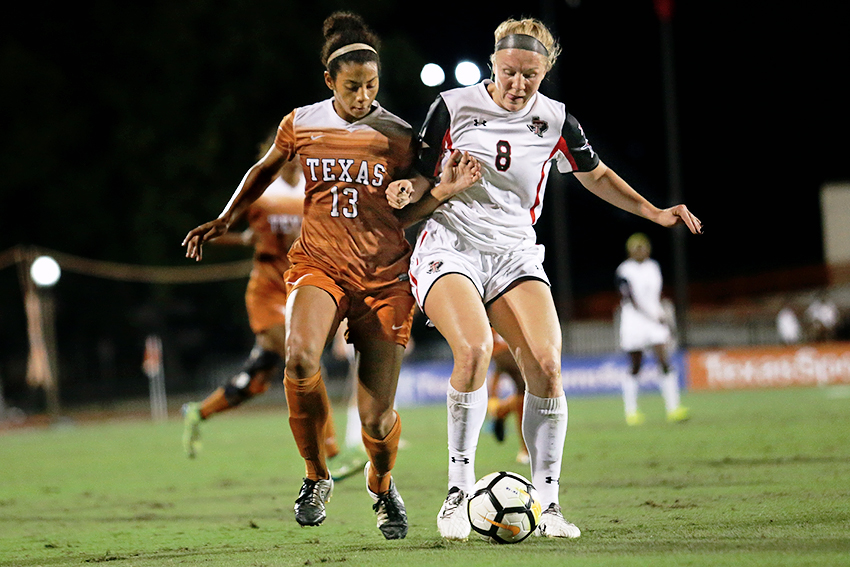 After a full 90 minutes and two overtime periods, No. 21 Texas and No. 4 North Carolina still couldn’t reach a decision before ending in a 1-1 draw.

The Longhorns looked poised to put on another great performance against the Tar Heels after a dominant 3-0 victory against the Rice Owls.

In a grueling double overtime match in Chapel Hill, the Longhorns held their own against one of the best teams in the country.

Texas took the first lead of the game — just 1:10 into the match. The Tar Heels turned it over on their own end before junior forward Cyera Hintzen gained possession, beat the goalie and gave the Longhorns a quick 1-0 lead from 12 yards out.

The Longhorn defense was solid but the Tar Heel offense was relentless, outshooting the Longhorns 20-9 overall and 6-5 in shots on goal.

However, Texas goalkeeper Nicole Curry did not disappoint. Her stellar performance included a save in which UNC midfielder Dorian Bailey’s penalty kick deflected off the post and rebounded back to her.

Her follow-up attempt was squandered as Curry hustled back into position to make the save, allowing Texas to maintain their lead. Curry finished the game with four saves.

North Carolina’s defense was just as imposing after conceding the goal in the first two minutes. UNC head coach Anson Dorrance substituted Claudia Dickey in for Samantha Leshnak to start the second half at goalkeeper. The substitution paid off as Dickey made four saves in the second half and in both overtimes.

It was only a matter of time before the Tar Heels would break through. That time came at the 52:16 mark when forward Taylor Otto scored the equalizer, assisted by forward Brianna Pinto and midfielder Rachael Dorwart.

Although both teams threatened to score the game winning goal during both overtimes, the score remained 1-1 until the final whistle was blown.

Expectations were set heading into this season, and this Longhorn squad just proved what everybody has been claiming: This team can play with anybody in the country.

But things won’t get much easier for the Longhorns as they get one day off before taking on No. 23 UCF in Chapel Hill, North Carolina, at 4 p.m. on Friday. After Wednesday’s draw, Texas remains undefeated at 1-0-1.

“I told them that I was incredibly proud of them,” Kelly told Texas Sports. “I was very thankful that each and every one of them was representing me here today on Carolina’s campus. I told them we are going to enjoy one another and recover for Friday.”