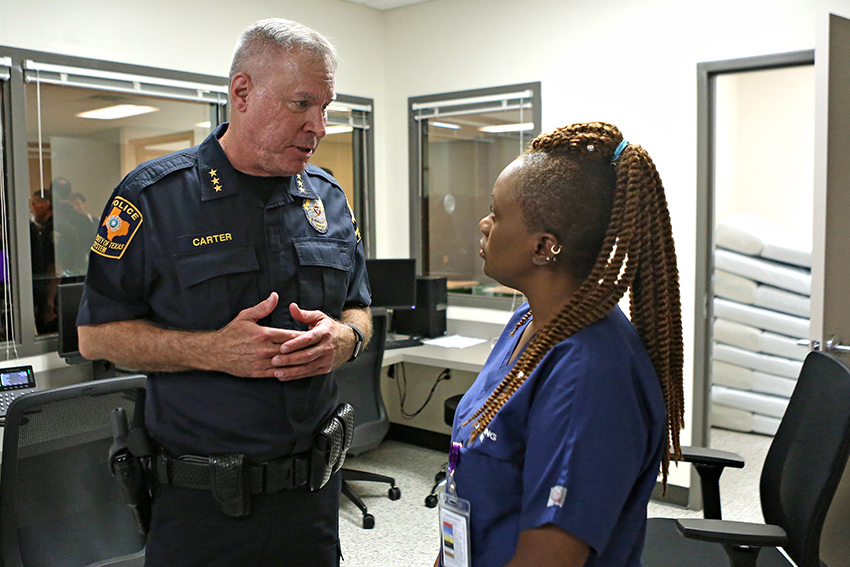 After more than a decade of planning, Austin’s new Sobering Center opened its doors Thursday as an alternative to jail and emergency room sobering. Instead of facing punitive measures, such as a misdemeanor or costly medical fees, those who are publicly intoxicated can now be transported by EMS or law enforcement to the public facility to sober up and safely recover.

“Our primary mission is to provide safe sobering for people, so when they are … publicly intoxicated and can’t care for themselves, they’re brought here,” said Rhonda Patrick, executive director of the center. “We really want to give them any help they might need so that they don’t end up in a situation where they’re spending a lot of resources.”

In the past year, the UT Police Department arrested 23 students for public intoxication. In 2017, Austin EMS had 1,092 alcohol-related calls that resulted in transport to an emergency room. With an operational budget of $1.7 million from the City of Austin, the Sobering Center aims to offer a non-punitive solution which will also reduce the number of bookings and emergency room visits for public intoxication.

Anand Pant, a management informations systems senior and former president of the Students for Sensible Drug Policy, said the new center will encourage students to call for help without fear of punishment.

“It’s much better to get people to a safe space and to have resources rather than being thrown into jail for public intoxication,” Pant said. “Booking someone is never a good thing, whether that be from a financial point of view or from just a humanist point of view.”

The Sobering Center anticipates that 75 percent of people admitted will be “one-time users” such as college students and festival attendees, according to the center’s website. The other 25 percent are “repeat users”, such as people with chronic substance abuse problems. The center is staffed with certified paramedics and individuals who have been trained in medical observation, first aid and crisis management.

“When they’re admitted into triage, we’ll assess what level of attention they’ll need by taking their vitals, evaluating them and monitoring them,” support specialist Leigh Garcia said. “As soon as they’re sober enough to meet our medical criteria and safe to go home, we will release them and make sure they have safe transportation.”

The Sobering Center, located at 1213 Sabine Street, is scheduled to be fully operating by Oct. 1. Those who are age 16 or younger, physically aggressive or suspected of driving under the influence will not be admitted.

William Kelly, sociology professor and director of the Center for Criminology and Criminal Justice Research, said the center can be a good start to treating substance abuse.