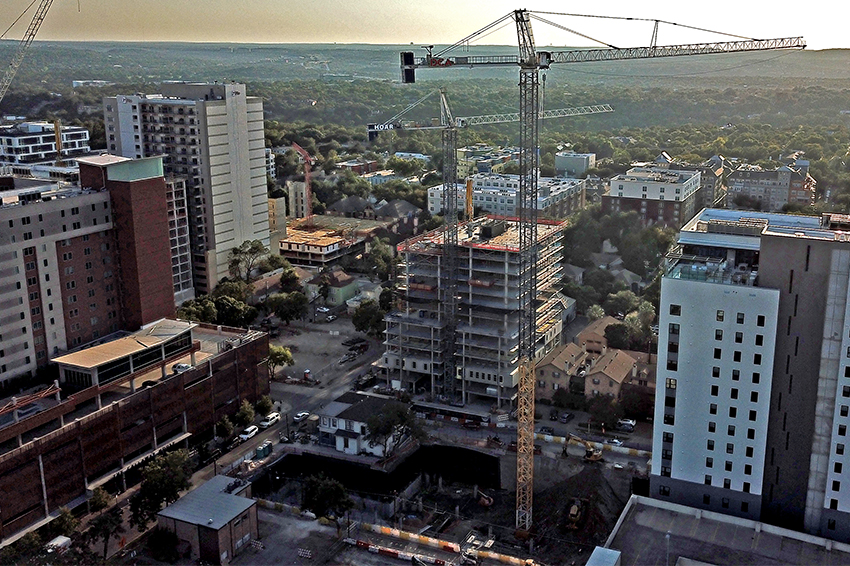 West Campus is notorious for ever-expanding growth, and the past year was no exception.

Four new student housing projects were completed in 2018 and have recently opened for students: Skyloft, Aspen West Campus, The Nine at Austin and Avon @22. There are 10 more slated for completion in 2019.

In West Campus alone, 850 units have been completed since 2015. These units fall under the University Neighborhood Overlay, or UNO, a set of zoning rules created in 2004 to specifically guide development in West Campus.

Dan Keshet is the blogger behind Austin On Your Feet, which covers urban development policies and politics. Keshet said under UNO rules, developers must follow design guidelines such as wider sidewalks and extra layers of amenities.

Keshet, who has lived in West Campus for years, said the area houses more and more students every year.

“Far, far more students live in West Campus today than they ever have,” Keshet said.

Keshet’s blog charted growth rates in West Campus and found that at the rate UNO is growing, approximately half of UT undergraduates will live in new units created under UNO by 2023. He credits this increase to development and UNO’s focus on affordable housing units built into new buildings.

Rent in the Austin area has gone up only 0.2 percent in the last year, according to RENTCafe, a real estate listing site. But West Campus itself is a different story. The abundance of new units for rent does not necessarily correlate to lower prices, said Laura Cochrane, an Austin-based realtor with REspace Realty.

Cochrane, who has worked with students in West Campus for 25 years, said newer developments would rather have vacancies than drop their rental rates. Instead, Cochrane said students should stay away from high rises and look for older, individually owned condos and houses.

“Even though they’re older, they’re almost as nice as the newer stuff,” Cochrane said. “They might not have all of the amenities, but (they are) a quarter of the price marked down. These developments are just shooting themselves in the foot.”

“The idea that a student, a freshman, would come to Austin and say, ‘Okay I’m going to live in West Campus’ — that is totally possible,” Keshet said. “The idea that one of them would come and buy a house in any other neighborhood near West Campus is laughable. So when I compare what’s happened to West Campus versus other places, I’d say that building lots of student housing has actually kept it relatively more affordable to the average student.”

While cheaper housing options such as Riverside are available, paying for a higher rent in West Campus gives students greater accessibility to campus, Keshet said.

“There’s something special about being right close to where everyone else is,” Keshet said. “So many people live there in walking, biking, scooter distance. You can get around so easily. It’s fun to be where the action is.”

Business honors sophomore Will Acheampong, who lives in Skyloft, said his pricier rent is made up for by the better services and furnished apartments.

“I knew it was gonna be a risk living in a new place that hadn’t been built,” Acheampong said. “But in the end they paid close attention to mistakes some other developers had made.”