Dealing with roommates is (usually) easier than you think 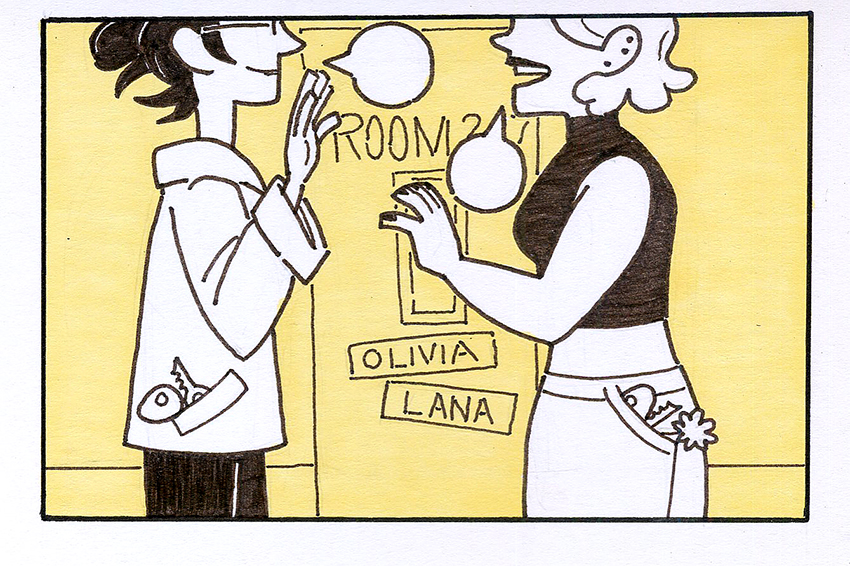 For a lot of people, the first year of college is overflowing with new experiences, such as living with someone who isn’t a parent or a sibling for the first time. Many students find this to be a source of anxiety as move-in day approaches. In spite of this, Duren resident assistant Steven Santoyo said most roommate pairings work out.

“I had 60 residents last year and 55 this year, and I’m happy to have dealt with roommate conflicts only three times,” communication studies senior Santoyo said. “The most common reason for friction is when the student doesn’t know quite know how to talk to their roommate about what is bothering them … usually it’s something minor that is bothering them that over time accumulates to a major problem.”

“My roommate wouldn’t do the dishes or take out the trash,” Fisk said. “It’s hard because when you straight up address it to them, of course in the moment they’re going to say that they’ll do better. Talk to them once up front, but if the issue keeps coming up, start texting them reminders every day.”

Living with someone for the first time, even a close friend, could potentially reveal personality quirks that were previously hidden.

“My roommate’s boyfriend was really into couponing, and he basically moved in with us,” economics sophomore Hannah Smith said. “Every time there was a sale at H-E-B, I would come home and the fridge would be full of like Lean Cuisine.”

Other sources of friction between roommates can be more serious. Business sophomore Landry Harmon said there were periods of time when he had to avoid talking to his roommate altogether.

“He always needed someone to talk to,” Harmon said. “He basically made the living room his second room. There were points where I would go into my backpack and get my noise-cancelling headphones, put them on like I was listening to music, and put my head down to walk through the living room so he wouldn’t hold me hostage for 30 minutes.”

If roommate difficulties reach a boiling point, UT offers resources to those looking for outside help. Students can speak to their resident assistant, set up an appointment at the Counseling and Mental Health Center or visit the University Ombuds Offices, which teaches RAs how to mediate friction between roommates. As a last resort, it is possible to request a roommate change.

“I have only recommended a room change once,” Santoyo said. “It’s a big move, however, because there is no guarantee they will receive a new room in the same hall they’re living in.”

Above all, the key to living successfully with someone is patience, Fisk said.

“Whenever you guys meet each other, at least give some time for everybody to settle in,” Fisk said. “Everybody is kind of weird at first. People are totally in a different atmosphere, totally new to this, so people are not going to perform or do things the way that they will for the rest of the year.”