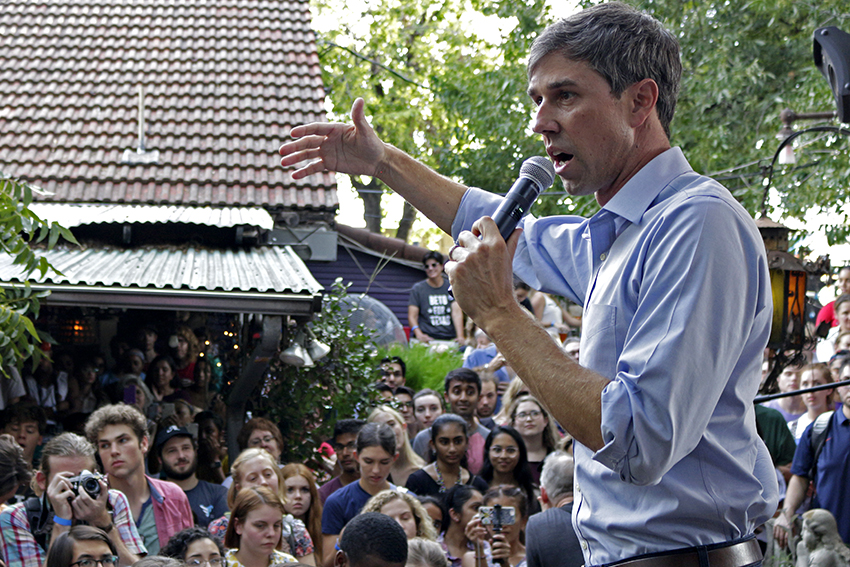 Among the hundreds of students attending was government senior Jessica Isaacs, who felt O’Rourke offered something different from previous Senate candidates.

“I feel like he is more Texas, southern-based,” Isaacs said. “And I think that’s what’s going to win down here. You can’t take someone like President Obama, put him down here and win. And I think that he really does a good job to reach out to the other side, and maybe some people don’t like that, but that’s what we need right now.”

Billed “Back to School with Beto,” the event focused on student-related issues such as student loan debt, criminal justice reform and Deferred Action for Childhood Arrivals, which allows undocumented immigrants who were brought to the United States as children to live and work for renewable periods of two years.

“A lot of what I talk about is what I first heard from listening to college students and young people all over the state,” O’Rourke told The Daily Texan in an interview. “I met a lot of ‘Dreamers’ tonight, a lot of young ‘Dreamers’ who said they’re really counting on us to fight for them and be there for them. You know, Texas is the most diverse state in the country. We could be the state that leads the way on immigration reform.”

Journalism freshman Rory Gaudette, who also attended the town hall, said she thinks gun control will be a driving issue in getting students to vote for O’Rourke, who is a proponent of stricter gun laws.

“Right now (the biggest issue for students) is gun control legislation,” Gaudette said. “I think that’s something that a lot of students are concerned about.”

O’Rourke also said holding events on college campuses was imperative to getting young voters to turn out to vote.

“I think showing up is fundamental to everything else,” O’Rourke said. “We’ve been to so many of the universities, from historically black colleges to community colleges, to other institutions of higher learning. Not only do I get to introduce myself and share why it is that I’m running to represent Texas in the Senate, but I get to learn a lot.”