Students and families continue to rebuild after Harvey 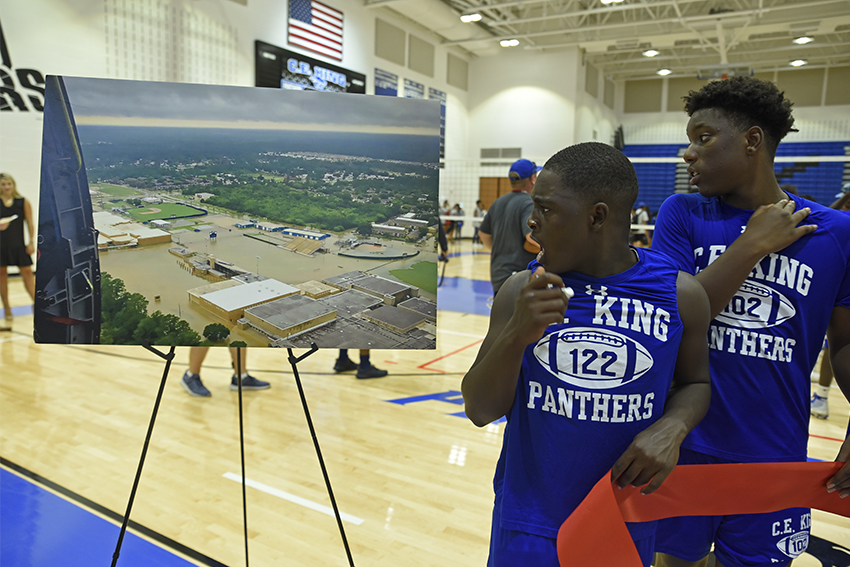 Hurricane Harvey made landfall last August, but advertising senior Hana Mostajeran is still feeling its effects of it. In December, her family had to celebrate Christmas at a family friend’s house, and her parents did not return to their reconstructed — but empty — home until April.

“It was really hard for me because I wanted nothing more than to be with my family, but at the same time, it’s difficult to go back and visit when you’re not going back to your own home,” Mostajeran said.

More than 17,000 UT students are from hurricane-affected counties in Texas, and 1,433 students could not make it to the first day of classes due to the hurricane, according to Student
Emergency Services.

Mostajeran started her semester a week after most students, opting to stay with her family in the immediate aftermath. This summer, she helped her family pick out furniture and decorations­ — the last stages in a rebuilding process some in her neighborhood are just now beginning.

“It’s still honestly not finished a year later,” Mostajeran said. “The actual construction was finished around April. It was a long process, but my parents were one of the first people to come back, so some people are just now in the beginning steps of putting up drywall.”

The category four storm accumulated an estimated $125 million in damages and impacted more than 2.9 million households across nearly 50 counties, according to ACCUWeather.

Sarah Beech, a government and psychology junior, was already in Austin by the time the hurricane hit her home in Kingwood in northeast Houston, but her parents were forced to live out of the second floor of her home after flooding destroyed the first.

“All of the (second floor) rooms were cluttered with furniture and things they saved from the flood so upstairs was pretty chaotic,” Beech said. “Their only solace in terms of being able to make their own food was a microwave they set up upstairs.”

More than 890,000 families applied for Federal Emergency Management Agency disaster relief aid in the months immediately after the storm, according to the Texas Tribune. UT’s Student Emergency Services said it received 1,600 student requests for emergency aid, which included emergency housing services and funding for textbooks and school supplies.

“Houses are still reconstructing,” Jamolo said. “It costs a lot, and where we live, we have low income, so it’s hard to repair your house throughout the year.”

Beech set up a GoFundMe to help her parents pay for the repairs and ultimately raise more than $1,000. Beech said her church back home hosted a Flood Supper twice a week for those left without kitchens and that community members cooked meals for her parents often.

“There were a lot of small donations that came together, so (my parents) got through it, but it definitely was this big unexpected expense they never thought they would have to endure,” Beech said.