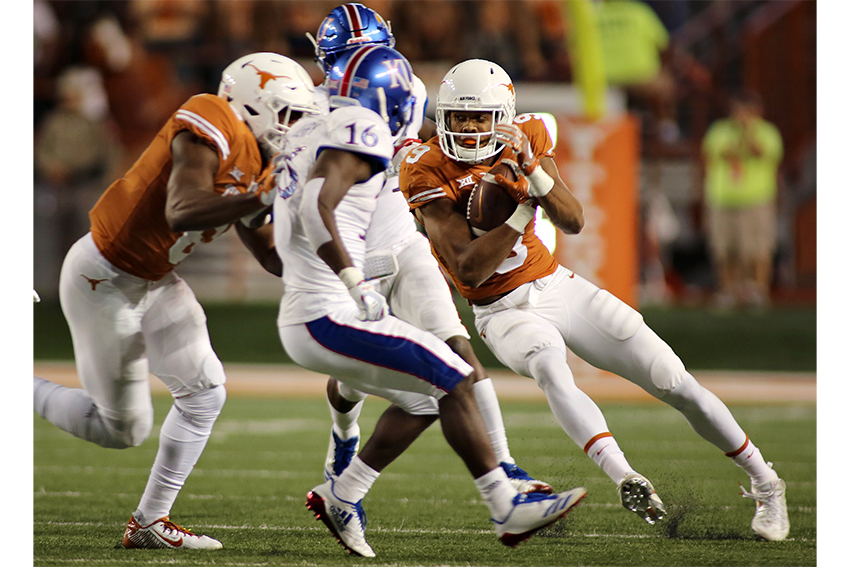 Last year, Maryland’s 51-41 upset of Texas sent the Longhorns back to the drawing board. Now days away from the rematch, both teams trot out a revamped lineup.

Here’s how the Longhorns matchup with Maryland for Saturday’s game.

It goes without saying that Texas’ offensive line performance was less than ideal last season. However, with the addition of offensive line coach Herb Hand and graduate transfer running back Tre Watson, Texas should certainly take steps forward in the running game this season.

With that being said, Maryland is returning two workhorses from last season: senior Ty Johnson and junior Lorenzo Harrison III. Johnson scorched the Longhorn defense last season, rushing for 132 yards on 12 carries, including a 50-yard touchdown. Both runners finished with more rushing yards than any running back on the Texas roster. The two athletes could potentially give the Longhorn defense more problems Saturday.

The biggest position edge is at receiver, and it’s in favor of the Longhorns. While the Terps return their No. 2 and No. 3 leading receivers, graduate student Taivon Jacobs and senior Jahrvis Davenport, the departure of DJ Moore to the NFL undeniably hurts the Terrapins’ passing game.

“He’s (Lil’ Jordan) had a great camp,” offensive coordinator Tim Beck said. “Him, Collin Johnson and Devin Duvernay, those three guys, I’m really proud of them. They’ve worked really hard, honed in on their craft… I see a difference in the way those guys play.”

The Texas defense ranked second in the Big 12 last season with 21.7 points per game allowed. If you take out the 51-point atrocity at the hands of the Terrapins last season, they crack the top 20 at 19.3 points per game allowed. Texas now has a full year under defensive coordinator Todd Orlando and should not have issues with personnel, something that burned Texas in the season opener last year.

Another thing Texas will benefit from is heading into the game with a full defensive game plan, a luxury this defense didn’t have at this point last year with the new coaching staff.

“Last year we came into the first couple of games and we didn’t want to overwhelm them with the whole package,” Orlando said. “This year, just the install was a lot more aggressive… we’ll come in with the whole plan.”

Maryland experienced addition by subtraction with the departure of defensive coordinator Scott Shafer in April 2016. The Terrapins ranked 120th in points allowed per game at 37.1. Head coach D.J. Durkin is considered a defense-first coach, but his absence amid the ESPN report that opened a massive investigation into the program leaves Maryland in a bind without its defensive play caller.