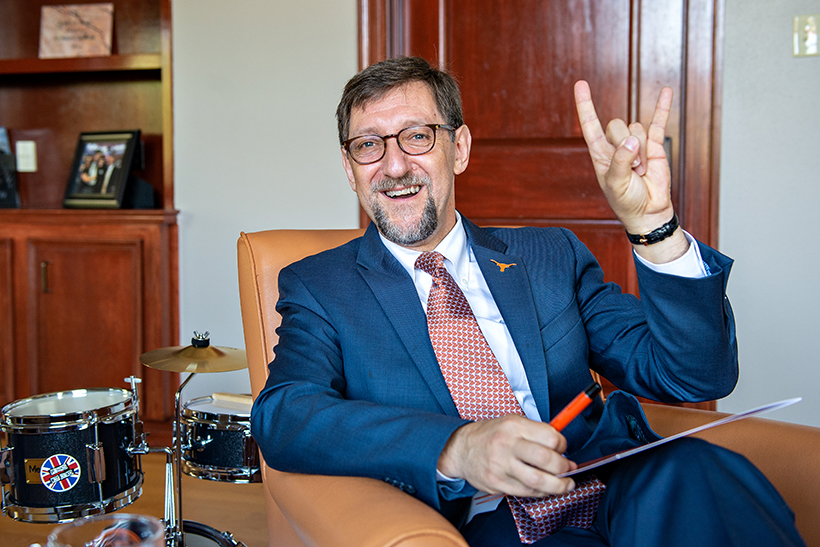 Paul Goldbart said when he first started his college career in physics, he occasionally felt he was not fit for it because he found it difficult. Decades later, he has a doctorate in physics from Imperial College London and is now the new dean for the College of Natural Sciences at UT.

Goldbart said he knew he wanted to be a theoretical physicist when he was about 13 years old.

“I just felt like there had to be something out there, something that brought lots of ideas together,” Goldbart said. “And when you further went into the field, the less you had to learn because the more it came together into a kind of unifying story.”

Goldbart’s appointment as the Dean of CNS began Aug. 1. As an undergraduate student, Goldbart attended Cambridge University in England and later obtained his master’s degree from the University of California, Los Angeles. He said he has always loved the environment of university campuses. For 41 years, he has been a part of research and faculty at multiple universities.

“I think (universities) are fantastic engines of good,” Goldbart said. “(They are) places where people discover  who they are, what they can be and how they can contribute to the world.”

Before coming to campus this month, Goldbart was the College of Sciences dean at the Georgia Institute of Technology. During his time at UT, Goldbart said he wants to make sure CNS students are constantly inspired by the concepts they learn in the classroom.

“I like this quote that goes back to Oliver Wendell Holmes Sr.: ‘A stretched mind never recovers its original dimensions,’” Goldbart said. “I think it captures a healthy education program. You want students to come out changed and changed in a way that really elevates them and helps them to think about complex ideas.”

Dave Thirumalai, chair of the CNS chemistry department, said he has known Goldbart for at least 20 years as a scientist and thinks the college is lucky to have Goldbart as the new dean.

“He has got a very romantic ideal of what a professor is, which we don’t find very often anymore,” Thirumalai said. “His vision seems to be that you want to leave an indelible impression on the students who come to UT, undergraduates or graduates, regardless of what they pursue after they leave.”

“There’s a gap between CNS students and administrators, and there’s also a smaller gap between NSC and the average student,” said Chyu, a biochemistry and plan II senior. “All those communications and personal relationships are what I really want to make available to CNS students and make them feel more welcome.”

“Really immerse yourself in the subject and try to read about it from all angles,” Goldbart said. “Don’t just restrict yourself to what is on the syllabus or what is in the textbook, but have fun with it and don’t hesitate to ask questions.”