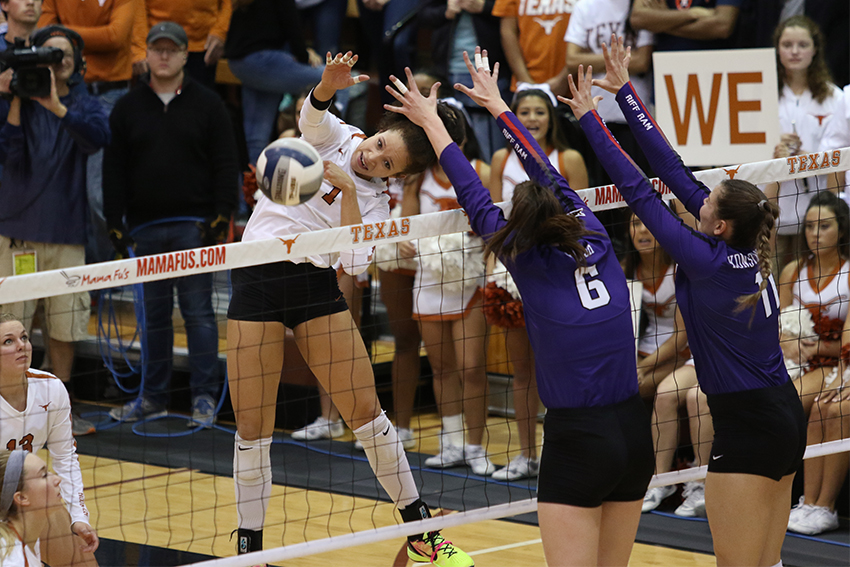 Quick turnarounds can be tough. For Texas, it’s just another day at the office.

Texas found itself behind early in the first set, as the Panthers got a 20-18 advantage behind the arm of senior outside hitter Adeline Ellis, who had four of her eight kills of the day in the first set. However, it was all Texas after that; a 7-1 run to close the set got Texas both the lead and momentum.

Senior outside hitter Yaasmeen Bedart-Ghani and junior outside hitter Micaya White have always been an integral part of Texas’ attack, but have found a talented group of freshmen to chip in as well. The Panthers got a taste of one of Texas’ up and coming stars: freshman middle blocker Brionne Butler.

Butler had five of her 12 kills of the day during the second frame and helped Texas push High Point to the brink. The high-flying freshman also added seven blocks to fill the box score. White added another 10 kills to Texas’ effort, and freshman libero Sydney Petersen tallied 14 digs.

It was pretty light work for the Longhorns following the second frame as they cruised to a 25-15 set, leading to their third win of the season.

Sunday’s game wrapped up the Longhorns’ trip to the HotelRED Invitational in Madison, Wis. and their second consecutive weekend on the road. They faced a similar stretch at the start of last season with trips to Florida and California in consecutive weeks.

Texas will have a chance to do some home cooking as it returns to Gregory Gym, where it hosts Texas State and No. 16 Kentucky to kick off the home campaign. First serve is set for 7 p.m. on Thursday, Sept. 6.