Blueprint to Texas victory over Tulsa 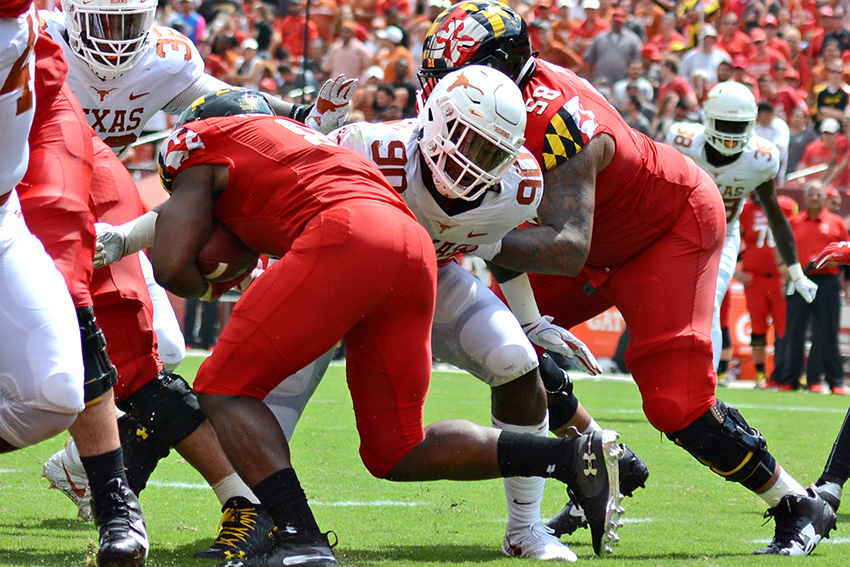 After the Longhorns clawed back from a 17-point first-half deficit to take a 29-24 lead midway through the third quarter, it seemed as though Texas was poised to start the season off on a high note.

One 86-minute rain delay and three fourth-quarter turnovers later, the Longhorns were back at square one after suffering a loss at the hands of Maryland for the second straight year, 34-29.

Now the Longhorns return to Austin for their home opener against Tulsa in hopes to notch their first win of 2018. Just as Maryland was by most pundits, the Golden Hurricane can’t be completely written off.

Let’s get right into how this week could play out for the Longhorns:

… it forces turnovers. Despite falling behind late in the game, Maryland protected the ball, giving it a shot to win. The Terrapins had zero turnovers on Saturday while Texas had three. If defensive coordinator Todd Orlando’s unit can win the turnover battle, it can stifle Tulsa’s momentum better than a 70-yard boot from freshman punter Ryan Bujcevski can.

… it stops the run. The Golden Hurricane rushed for nearly 300 yards in their contest with Central Arkansas on Saturday. Leading the attack is sophomore running back Shamari Brooks, who had 129 yards and two touchdowns on the ground. Texas found a way to halt Maryland’s rushing attack last week, courtesy of senior defensive ends Charles Omenihu and Breckyn Hager, but they’ll have to do it again this week to walk out of DKR with a victory.

… it controls the football. Maryland held on to the football for the majority of the game last week and had nearly five more minutes of possession than Texas did. Those are five crucial minutes Texas wishes it could have back. If sophomore quarterback Sam Ehlinger and the Longhorns can avoid offensive miscues, they’ll be able to control the pace of the game and the clock. The Longhorns would much rather end the game with a kneel down compared to a last-second desperation heave.

… it has a slow start. For the second consecutive year, Texas set itself up for failure by getting trounced midway through the first quarter. Despite coming back to briefly claim the lead, the game’s circumstances put too much pressure on players who lack experience and chemistry with the team. Jumping ahead early can help Ehlinger depend on his veteran wide receivers and running backs and put less pressure on him to make a play on his own.

… it can’t protect the ball. Texas had three soul-crushing turnovers on its final three drives of the game to seal its own fate. Turnovers kill momentum and can provide Tulsa with an easy way to cash in points and tire its own defense by putting it back on the field. If Ehlinger and the troops can minimize mistakes, Texas should not have a problem with the Golden Hurricane.

… disaster occurs. The Longhorns head into Saturday night’s game as 23-point favorites. While it’s the Longhorns’ home opener and the players are just as excited to be back as the fans are, Tulsa will come in with as big a chip on its shoulder as Texas will. However, it would take a concentrated effort on behalf of Texas to lose this game. A slew of turnovers and special teams mishaps could lead to a ghastly defeat if Texas looks past yet another inferior opponent.