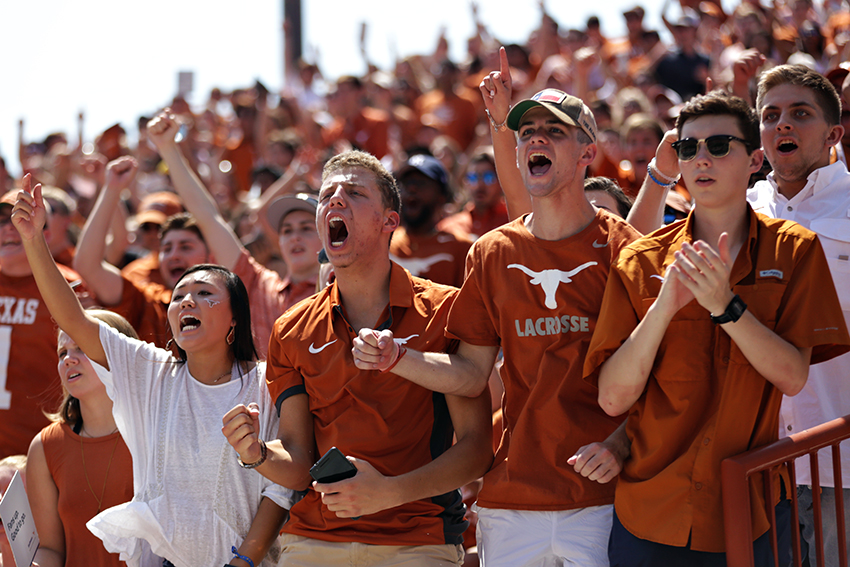 After years of complaints regarding the Longhorns’ game day atmosphere, Texas Athletics has decided to make several changes to improve the fan experience around Darrell K Royal-Texas Memorial Stadium
starting this season.

“We’ve listened to you and have worked hard to create an improved environment inside and outside of Darrell K Royal-Texas Memorial Stadium,” Chris Del Conte, director of athletics and vice president, said in a press release. “When you arrive for gameday, you’ll notice that we’ve taken many of the things that make Texas and Austin special and positioned them to create an elevated gameday experience across the board.”

This year, concession stand prices will drop for snacks and drinks offered at DKR. Liter bottled water, which was $6.50 per bottle in 2017, will now be $5. Regular fountain drink sodas have dropped from $5 to $3. Popcorn, candy and 20-ounce water bottles can also be purchased for $3
this season.

“We’re taking a close look at every aspect of the fan experience,” Del Conte said in the release. “Food and beverage is a big part of that. We’re going to maintain the quality our fans expect while giving them a break on
the pricing.”

According to Texas Sports, a family of four will be able to purchase a game day meal for $28 with the new
reduced prices.

The addition of this pregame concert series will bring live music to LBJ Lawn, outside of the northeast corner of DKR. Texas Athletics announced that Grammy Award-winner Jimmie Vaughan will be the inaugural headliner of
Longhorn City Limits on Sept. 8.

This festivity will also feature The Nightowls, a local R&B and soul group that will perform from 3:30 p.m.–4:30pm before Jimmie Vaughan takes the stage from 5 p.m. to 6:15 p.m.

All concerts will be free and open to the public. Fans will also be able to enjoy $5 16-ounce domestic beer and wine spritzers as well as $6 16-ounce premium beer.

This event, which will be held on San Jacinto Boulevard from East 20th Street to the Etter-Harbin Alumni Center, will provide fans with a new pregame street party atmosphere. Bevo Boulevard will open five hours before kickoff and will feature the Longhorn Band and Texas Cheer, and will allow fans to greet Bevo and the team as they enter
the stadium.

“Our staff has worked hard to bring the Bevo Blvd. concept to life with the goal of providing our fans with a place to go for exciting pregame action that features many of our outstanding Texas traditions,” Del Conte said. “Our goal is to have the best gameday atmosphere in the country, and Bevo Blvd. is a big step in
that direction.”

This announcement comes along with the approval of the south end zone renovation project at DKR. The project, which was approved by the Board of Regents in August, will bring new suites and coaches offices, upgrade the Moncrief Athletics Center and add additional seating to bowl off the corners of the south end zone.

Although the renovation project won’t be complete until the 2021 season, Texas fans who attend the season opener this Saturday will get the first look at the new game day festivities around DKR.