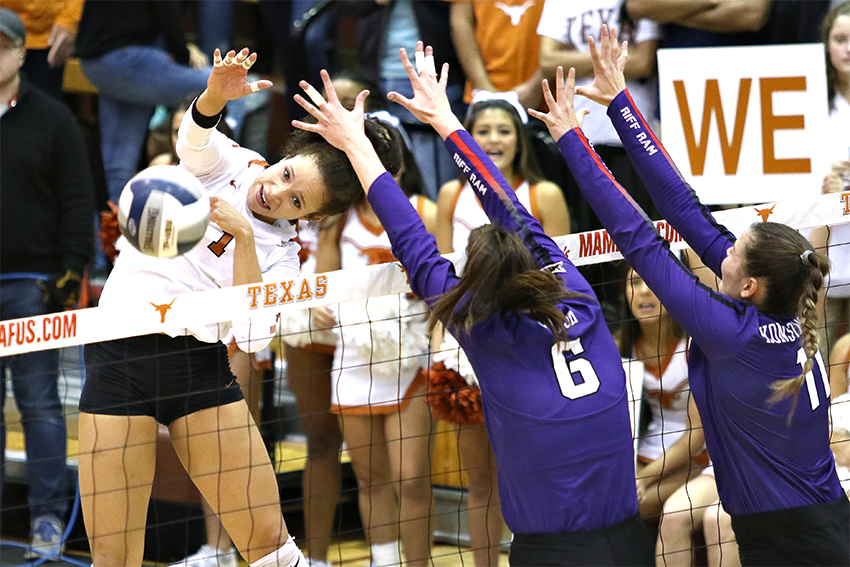 The Longhorns have spent much of their time just about everywhere, except home.

A summer tour of Europe and recent trips to Nebraska and Wisconsin opened the season and added a lot of miles to the team plane. But on Thursday, No. 6 Texas finally returns to Gregory Gym for the Longhorns’ home opener against Texas State.

“It’s always nice to come home and get acclimated with school starting and being able to be in our own beds,” head coach Jerritt Elliott said. “Playing in front of our own crowd will be very nice for these players.”

The Longhorns (3–1) are coming off a bounce-back victory against High Point after falling to then-No. 8 Wisconsin in four sets. For Texas, its loss was more of a positive learning experience than a harbinger for things to come.

Elliott used freshman-heavy rotations on the court, keeping at least three newcomers on the floor at crucial points in matches. Despite the loss, there have still been a lot of positives to take away from the first four games.

“We know that they (the freshmen) are talented, but when they handle the pressure, they go about their business on a point-by-point basis and they’ve done a really good job with that,” Elliott said. “The way they have performed has given a lot of confidence to the upperclassmen as well.”

Last weekend’s trip to Wisconsin also gave Texas’ newcomers their first experience in a hostile environment. The Longhorns played in front of a crowd of over 7,000 against the Badgers last Saturday but gave them valuable experience ahead of tough matchups down the road.

“It showed us how to respond when we get rattled,” senior middle blocker Morgan Johnson said. “People who don’t have a bunch of experience on the court, you could see that they weren’t in their element … it was nice for them to get their feet wet in front of a big crowd.”

Despite the fanfare surrounding the freshmen thus far this season, Texas’ stars have dominated quite frequently. Johnson has notched 24 blocks to lead the way in that category and junior outside hitter Micaya White has tallied a team-high 56 kills.

That’s not to take anything away from the young group, though. Three of Texas’ five leaders in kills are freshmen, in addition to freshman libero Sydney Petersen, who has stepped in to replace graduate Cat McCoy with 61 digs on the year.

Statistics and numbers may not speak much, but development on the court and chemistry sure do. And Elliott and his veteran players have taken notice.

“We’re a lot farther along than we expected to be,” Johnson said. “There a lot of times where I’m like, ‘Are y’all even freshmen?’”

Now, Texas will take its home court for the first time this season, a place that Johnson calls the “best place to play in college.” Texas will play host to Texas State on Thursday and No. 16 Kentucky the following day.

The Bobcats (5–3) come into this game riding a five-game win streak. The Bobcats also bring in a talented freshmen core, headlined by setter Emily DeWalt and outside hitter Janell Fitzgerald. This duo, along with junior setter Cheyenne Huskey, should keep Texas’ hands full.

The excitement around the home opener and the large crowd should give Texas more than enough energy, something that Gregory Gym hasn’t lacked in quite some time.

“They’re so loud,” Johnson said. “If we’re ever low on energy, you just have to look into the crowd.”

Texas will host Texas State to kick off this season’s home slate. First serve is set for 7 p.m. on Thursday at Gregory Gymnasium.