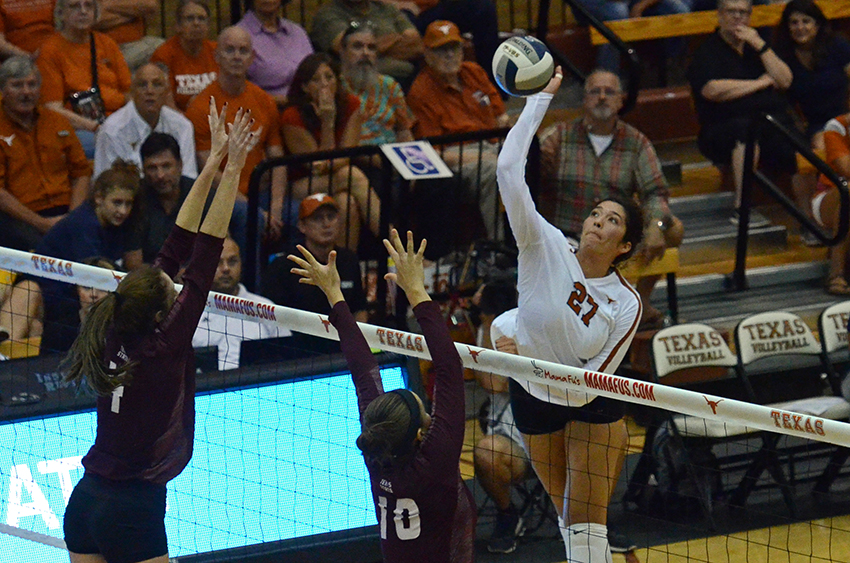 The energy before the game started was something special to behold. The student section was raucous, the players were singing along to the music being played and almost everyone in the stadium was wearing burnt orange.

After playing three ranked opponents in their first four matches, the Longhorns took care of business against Texas State, beating the Bobcats in straight sets.

The first set was much closer than was expected, but the Longhorns, riding the fans enthusiasm, pulled away after being tied at 12 points midway through the set. While the Bobcats’ aggression at the net caused initial issues for Texas, the team quickly adjusted and went on to win 25-18.

The fans’ role in the match was notable, as this was the first home game of the season. The loud cheers, the constant “We are Texas” war chant and support from the fans in burnt orange contributed to the Longhorns pulling away in the first set.

“When we play at home, it’s like this nice breath of fresh air,” said senior Yaasmeen Bedart-Ghani. “That just makes the experience that much better.”

The second set seemed much closer than the first, but the result was very much the same. The Bobcats were within five points almost the entire set and would seemingly make a run just when the Longhorns looked like they would pull away. Texas was able to stave them off and won the set on a service error, 25-19.

After two sets, Texas was firmly in control. While service errors continued to be an issue that first reared its head last week against No. 2 Wisconsin, the Longhorns were solid enough in other areas to make up the difference.

“I think we were steady,” head coach Jerritt Eliott said. “We were composed. The only area we really struggled with was our serving. We’ll fix that and spend some time on it.”

The third set featured one of the longest rallies of the game, with both sides going back and forth making impressive saves. When the Longhorns eventually won the point, the crowd erupted into a frenzy.

“It was really, really loud,” freshman Brionne Butler said. “I got really hyped up and nervous, but it was a really good experience to play in front of our fans.”

After the rally, the Longhorns were up 5-1, but the Bobcats fought back to tie it up at 9 and made the set competitive. Texas would then begin the process of pulling away as the team won six out of the next seven points to run the score to 15-10. The team didn’t look back and won the set 25-19.

The Longhorns play the No. 16 Kentucky Wildcats tomorrow in their fourth game against a ranked opponent in their first six games. The game will be at 8 p.m. at Gregory Gymnasium.

“We have to get ready for a better opponent,” Elliott said. “I thought Texas State was really good, but Kentucky is going to have a little bit more firepower than them. What a great opportunity for us to play them in front of our home crowd.”