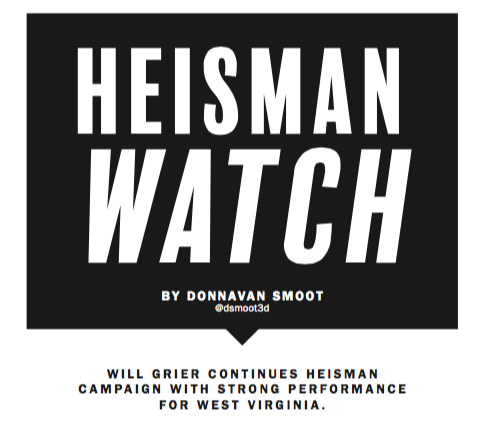 As Week Two in college football kicks off this weekend, here's what the Heisman Watch looks like right now:

Love struggled in his season debut. The preseason favorite was bundled up and limited to a dismal 29 yards on 18 carries. Despite the fact that he was held in check by San Diego State, the Cardinal still won in blowout fashion, 31-10. Love was unable to get to the second level of the defense, which was practically where he lived last season. Head coach David Shaw tried to get his star running back as involved as possible with a myriad of chances and creative formations. However, the Aztecs focused in on Love and perfectly executed their gameplan.

Although he had a disappointing season opener, Love will have plenty of opportunities to earn the trophy throughout the season. It is hard for a skill position player to have a perfect season and Love’s early struggles allow for him to bounce back with a massive home game against No. 17 USC this weekend. If Love can put on a show on the national stage, the running back will be a name thrown around even more as the Heisman conversation continues.

After stepping into the national championship game and orchestrating a second-half comeback for the ages, Tua Tagovailoa earned himself the starting role for the Crimson Tide. The sophomore from Hawaii opened the season as a 10/1 favorite to win the Heisman, according to Westgate Las Vegas Superbook. Many believed the hype was far too premature after only performing for one half. However, just as one half placed him into the Heisman conversation, one half of football kept him there.

Tua dazzled in primetime against Louisville. He threw for 227 yards, completing 75 percent of his passes, and three touchdowns. In his short, but effective, performance Tagovailoa had a potential Heisman moment on the first drive of the season. Tua avoided the Louisville pressure, spun away from a player and back into the pocket before flinging the ball toward the endzone and right into the hands of an Alabama wide receiver. Alabama went onto win the game, 54-14. The top-ranked Crimson Tide will host Arkansas State this weekend.

#7 Will Grier, quarterback, No. 14 West Virginia

Grier started the season off on fire. The senior quarterback threw for 429 yards and five touchdowns in a rout of unranked Tennessee. He showed complete control of the high-powered offense that will look to be a force in the offensive-minded Big 12 conference. The Mountaineers were able to pick up right where they left off last season before Grier’s hand injury. If Grier is able to continue to produce these types of performances, he will not only have numbers by his name, but wins to show for it as well.

Considering that West Virginia doesn’t play a team currently ranked until November, Grier will have ample opportunities to light up scoreboards across the country. The Mountaineers’ toughest matchup, a place for Grier to solidify his Heisman case, will be a Black Friday meeting against the reigning Big 12 champs, Oklahoma. Grier will have to wait for that moment and focus on putting up video game numbers in the meantime. The Mountaineers will look to remain perfect when they take on Youngstown State this week.