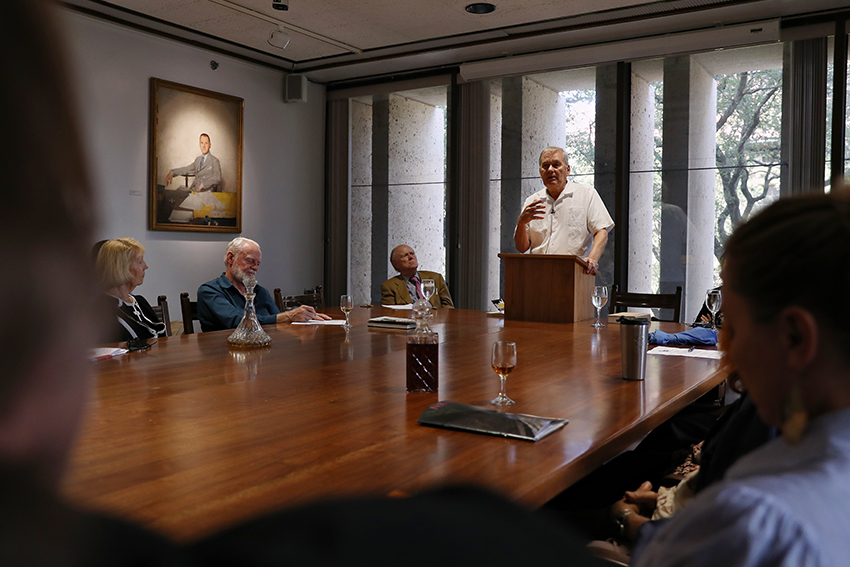 About 50 people traveled through the rain Friday afternoon to the Harry Ransom Center to hear speaker Jonathan Brown, a UT history professor and author, discuss the Cuban Revolution.

Brown is the author of Cuba’s Revolutionary World, a recently published book that details the Cuban Revolution. Brown graduated from UT with a doctoral degree in history and has taught history at UT since 1983.

“(I like) the interest that people show in it,” Brown said in an interview with The Daily Texan. “The Cuban Revolution is unique to all of the other revolutions in Latin America.”

During the lecture, Brown explained some of the misconceptions people have about the Cuban Revolution.

“In 1957, Fidel Castro was just a minor part of the revolution,” Brown said. “(But) Castro was able to consolidate his power and eliminate his enemies.”

As an author, Brown has written four other books about Latin-American affairs, including two about Argentina, one about Mexico and one about Latin America as a whole.

Plan II junior Michael Sanchez attended the event, and said he became interested in Latin American history through a UT class and continued to attend lectures like these for his own enjoyment.

“I liked some of the explanations (Brown gave) about why Castro had stayed in power,” Sanchez said. “I hadn’t really realized the extent to which militia (played a role).”

Instead of focusing on the military or the political aftermath of the Cuban Revolution, audience member William Apt said his takeaway from his visit to Cuba 20 years ago was the unique showing of diversity he saw in the country.

“It was really a fascinating place,” Apt said. “It was the first time I had ever seen mixing of the races so harmoniously. It didn’t occur to (Cubans) to think differently of black people.”

Brown is currently working on projects relating to different parts of Cuban history. He is also writing a textbook about the three revolutions that have taken place in Cuba, explaining the similarities and differences among them.

Regarding the importance of being educated on the Cuban Revolution, Brown encouraged people to ponder Latin American revolutions near the United States.