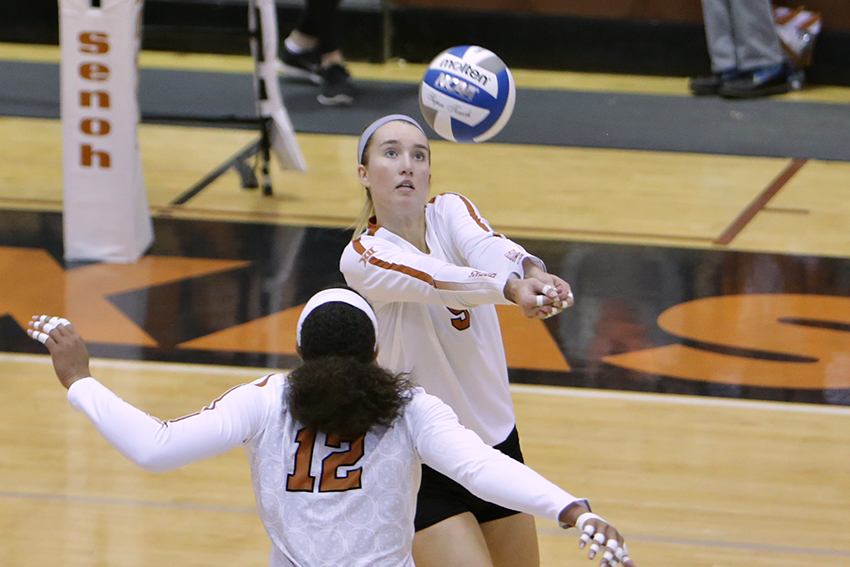 With No. 6 Texas and No. 16 Kentucky tied at 24 in the first set, freshman libero Sydney Petersen came up to serve.

Petersen’s serve led to a Wildcat attacking error, giving the Longhorns the set point and sending Gregory Gym into a frenzy in the process.

But that was the last time it would have a lead in the set. Texas proceeded to give up three straight points to drop the set, 25-27.

“(The situation) felt really calm,” junior outside hitter Micaya White said. “As chaotic as it was, it was just really steady the whole match.”

But what did the Longhorns do right after that? Respond. And with a strong response at that.

“I just think we played consistent,” White said. “Nothing really rattled us, (we were) just really composed.”

Texas’ second set saw the same type of action, holding a near five-point advantage through the frame. The Wildcats closed in late, but couldn’t mount a second-consecutive set-closing rally, leveling the match at one set apiece.

A lot of what Kentucky was able to do right started from the serve itself. Strong servings caught the Longhorns off guard on several occasions, resulting in service aces or defensive errors on Texas’ side.

“I thought it was one of the best teams we’d played all season,” head coach Jerritt Elliott said. “They were good for a game and a half, two games, and then we caught up with them.”

What the Longhorns could not match in serves, they made up for in agility and attack. Texas used its unique combination of size and strength at the net to take over the game. Redshirt freshman middle blocker Brionne Butler and freshman outside hitter Logan Eggleston spearheaded the effort throughout the match, driving several balls down the middle of the court away from Wildcat defenders.

Texas flexed its muscles in the third and fourth sets, getting a fast start and holding on to the lead throughout each set. With Kentucky just a year displaced from being a top seed in the NCAA Tournament, this game gave Elliott a good look at where his team is at.

“We honestly didn’t think that Logan would be as good as she is,” Elliott said. “She’s been the one that’s made some changes for us and we have a little bit of a logjam at the (outside hitter) position … it’s good for us.”

Another crucial part of Texas’ strong attack — setting — was on full display on Friday night. Sophomore setter Ashley Shook tallied 51 assists, one night after Elliott said she had “the best match of her career.”

“I have every option every time,” Shook said. “I don’t have to worry about if someone wasn’t ready … everyone is making my job a lot easier for sure.”

The Longhorns had four players with over 10 kills, with White leading and notching a team-high 18 kills and 11 digs. As conference play is around the corner, the Longhorns will hope to see more of the same as the season continues.

Texas will get a week’s break before its toughest test of the season thus far — a home-and-home series against No. 4 Stanford, a team that ended Texas’ season last year. The Longhorns will play in Palo Alto on Sept. 11 before hosting the Cardinal at Gregory Gym on Friday, Sept. 14, at 8 p.m.