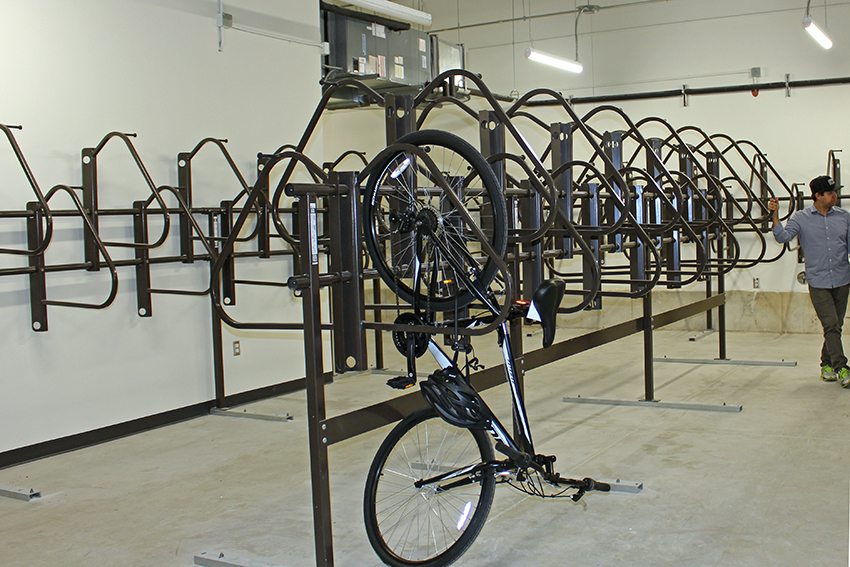 UT cyclists have a new space to store their bikes at the East Campus Garage. The storage room, which holds 160 bikes and includes a tire pump and tool station, is currently open and selling permits.

Jeremy Hernandez, bike coordinator for Parking and Transportation Services, said while there are more than 50,000 students on campus on a given weekday, there are only 15,000 car parking spaces available.

“That tells us there’s a need for alternative transportation because some people might not be able to park,” Hernandez said. “It’s just another option for them to get to campus.”

Bike lockers can be found at all campus parking garages, but a large room like this is the first of its kind at UT, Hernandez said.

“As the university grows and as the east side of UT expands, this garage (may become) a main location for parking and will make this place even better,” Hernandez said.

Cyclists may choose to park their car in ECG and bike the rest of the way to campus, or they may use the bike room for more long-term storage during semester breaks. Annual, summer and winter permits are available ranging from $30 to $60, and those who already have an ECG permit can use the room for free.

James Lentz, president of the Campus Bike Alliance, has used bike lockers in other cities and said they can be very practical. However, since he cycles from home to campus and between classes, he just uses bike racks around campus.

“In my circumstances, a (bike room) permit doesn’t make a lot of sense,” civil engineering senior Lentz said. “They’re a great option for people who drive to campus and would like to switch to their bike for the last mile and to get around campus itself.”

Bike lockers have become common fixtures in cities across the globe, including Austin. Secured bike parking is helpful when “you don’t want to leave your bike out in the weather” or “you know a train or bus is going to have its racks filled,” according to CapMetro’s website.

Hernandez said 20 people have signed up for permits so far, but he hopes the easily accessible permit, bike tool stations and monitored, climate-controlled space will encourage more people to sign up.

“I can’t help but think it’s like Christmas for parking your bike,” Hernandez said. “Hopefully a year from now, it will be full of bikes.”