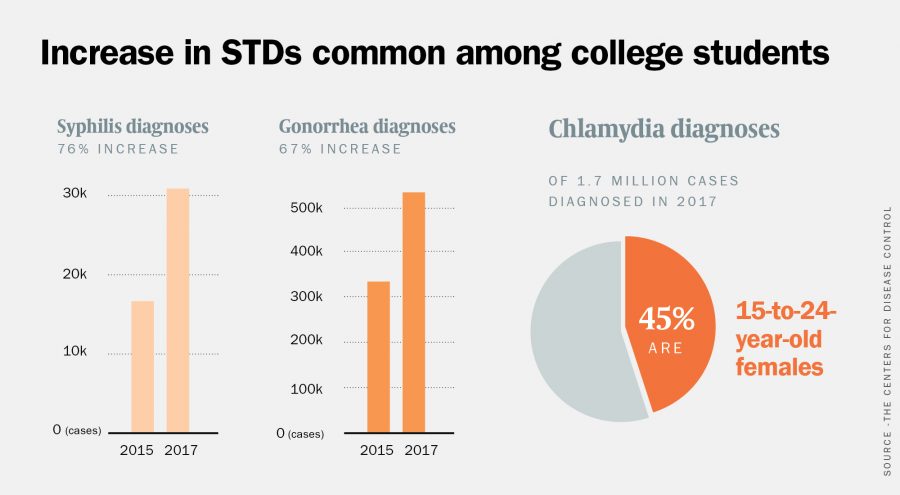 Many students are under the misconception that they cannot contract a sexually transmitted infection from oral sex, but this belief is false.

The Centers for Disease Control found that 2.3 million cases of chlamydia, gonorrhea and syphilis were reported last year in the United States, surpassing the record set in 2016 by more than 200,000 cases. Melinda McMichael, interim director and chief medical officer for University Health Services, said gonorrhea and chlamydia are the most common STIs spread through oral sex from male genitalia through mucus membrane contact.

“You might have zero symptoms after you contract an infection,” McMichael said. “You could potentially have a sore throat or visible white spots, but maybe not. It’s more common to have no symptoms.”

McMichael said in rare cases, oral sex can even spread HIV through blood exposure. She said to wear condoms and dental dams to protect against any infection, regardless if there are obvious symptoms.

“We don’t specifically know why some people have symptoms when they contract an infection and why some people don’t,” McMichael said. “When you have sex with someone, you’re having sex with everyone they’ve ever had sex with because there’s so many asymptomatic infections out there which is why they get spread so easily.”

UHS has an STI testing clinic where students can make an appointment with a provider and get tested, and results will come back within three to five days.

“It’s really quick and easy depending on what you’re getting tested for,” health promotion coordinator Katherine Protil said. “You can come in, get tested and continue on with your day.”

Protil said students believe they don’t have to be tested routinely and that they will just know when they have an infection. She suggests students take advantage of the resources UHS provides, such as getting vaccinated against human papilloma virus, a sexual disease that can cause six types of cancer if left untreated.

For those who do not want to enter a waiting room to get tested, there is an at-home testing kit called myLAB Box which can be ordered online. Its most popular box tests for eight STIs and costs $269.

“These epidemic levels of infections, combined with college being an age of love, exploration and freedom, mean young people should be especially careful and test frequently,” myLAB Box CEO Lora Ivanova said in an email. “Sometimes young people, especially those in college, take their great health for granted.”

Ivanova said in an email STIs can be spread through any skin-to-skin contact such as kissing alone.

“People may not realize that a romantic French kiss may result in an unwanted and unforeseen infection,” Ivanova said. “While unsettling, this knowledge goes to show the importance of regular testing and honesty
in relationships.”

The Healthyhorns Peer Educator program within UHS works to educate students on safe sex practices. Debleena Das, peer educator and public health junior, said after working with students on campus, she has noticed how little students come into college knowing about sexual health in general.

“A lot of people have misconceptions about STIs because it’s not something that’s necessarily taught, especially in a conservative state like Texas,” Das said. “There’s definitely a disparity in the knowledge that different people have and people might have just educated themselves on their own time.”