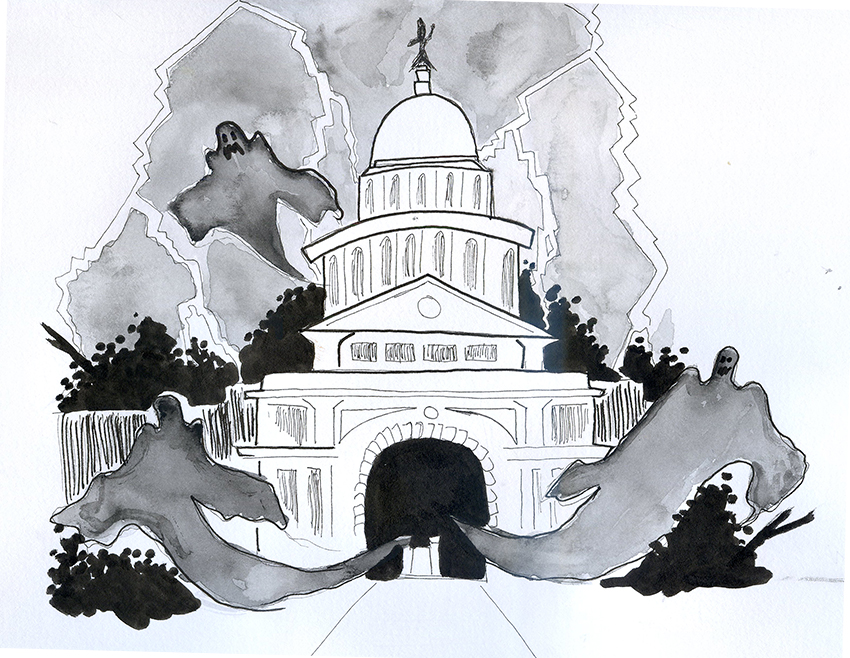 Founded in the 19th century, Austin has a history that leaves much to be explored in the otherworld. Tours such as Austin Ghost Tours and Haunted ATX seek to investigate the paranormal activity ingrained in some of Austin’s most popular places.

Monica Ballard has worked as a guide with Austin Ghost Tours for 14 years and has experienced many otherworldly encounters. For those looking to visit haunted places and have a ghostly experience of their own, Ballard says the best way to get spirits to make themselves known is to relax.

“When you’re doing some sort of mindless task or something like that and you just sort of daydream, that’s when people tend to see things out of the corner of their eye or something will drop and they’ll turn and look,” Ballard said.

Haunted ATX is another ghost tour company that Diane Blank works for. Blank said she doesn’t like to say that ghosts make appearances because a haunting actually occurs in different ways.

“People don’t necessarily see these things in real time from my observation,” Blank said. “Sometimes they hear them, sometimes they feel them.”

Austin has a lot of history, and in places where there has been an abundance of activity over the centuries, spirits are said to make themselves known. As spooky season fast approaches, The Daily Texan has compiled a list of locations where you might have a supernatural experience of your own.

Located on 6th and Brazos streets, the hotel, which is now owned by Hyatt, is notorious for being haunted. The hotel has a rather spotty history, with the tales of the suicide brides and the child who fell to his death down the main stairway, but Ballard says many ghosts dwell there.

For anyone who is new to the ghost scene, Ballard recommends going to the lounge of the Driskill hotel.

“Have a drink,” Ballard said. “Once they start to relax and stop looking, extraordinary things will happen.”

Littlefield House is home to the ghosts of Alice and George Littlefield. Blank said that for a long time, she believed that only Alice’s spirit remained in the house but that George recently made himself known.

Although Littlefield House is not open to the public, Blank and her tour groups usually explore the grounds of the house and will peer into the home.

“One day I’m there and one of my guests takes a picture through the window,” Blank said. “And on the staircase is this gray cloudy, shadowy figure, and about a week later, same thing, different group.”

Opened in 1922, this UT dormitory has an abundance of history. Amie King’s book, “It’s A Sardine’s Life For Me: A Memoir of the Scottish Rite Dormitory at the University of Texas at Austin”, covers the history of the dormitory and chronicles ghost stories that have been passed on through the years. However, King said that there is no hard evidence to prove any of it is real.

Within Scottish Rite, there is an empty elevator shaft. People speculate that the elevator within the shaft never actually arrived, even though there were supposed to be two elevators on each side of the dormitory. The empty space has since been the center of cryptic rumors.

“There’s a story where a girl’s boyfriend got killed in World War II,” King said. “And she was so distraught that she jumped in the elevator shaft and killed herself.”

Horror stories aside, visiting a haunted place in Austin may be just the thing for you. Whether it’s with a tour group or on your own, there’s nothing like a close encounter to get in the Halloween mood.