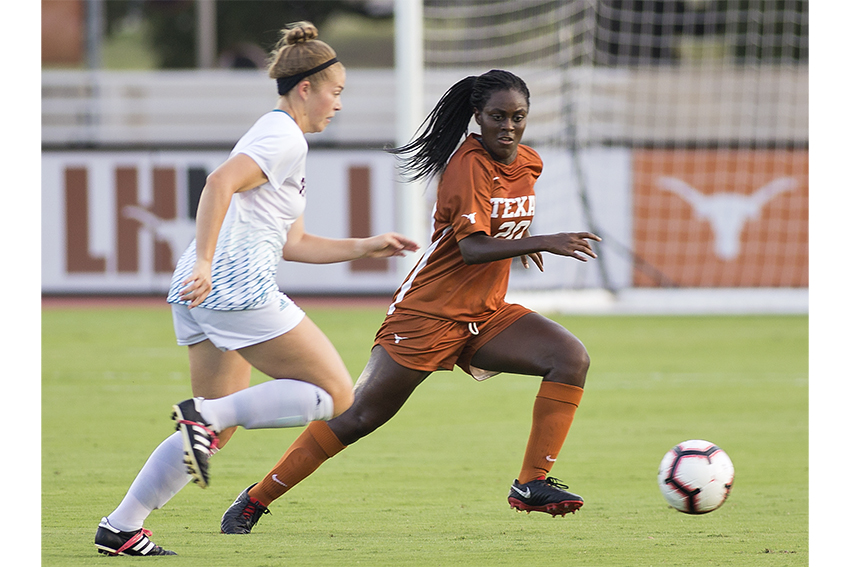 After a month of play, the Longhorns have maintained an undefeated record. On Sunday, they beat Houston Baptist handily, 4-0. In the aftermath of the dominate win, they moved up the rankings four spots to No.14. Their stifling defense only allowed two shots, leaving goalkeeper Nicole Curry with one of her less strenuous games of the year and her 13th career shutout. Senior Alexa Adams led the offensive charge with two assists and a goal of her own. They look to continue their winning habits with two matches taking place over the weekend.

The first of the two matches will be against University of Texas Rio Grande Valley, who the Longhorns beat last year after an overtime “golden goal” from forward junior Cyera Hintzen.

Hintzen, who has been on a tear early in this season, looks unstoppable. Her impact on this team can’t be understated or overlooked. As of today, the Garland, Texas, native sits at first in goals (six), second in points (12) and is currently tied for second in match-winning scores (two) in the Big 12 Conference.

The second match will be against Northern Colorado, who currently sits at 4–3–0 on the season. The matchup will mark the first ever between the two schools, however, this is the second consecutive season the Longhorns will face a team from the Big Sky Conference. Last year’s matchup was against Sacramento State, which ended in a 1-0 win for the Longhorns.

Texas enters both matches as the heavy favorite. The Longhorns have consistently showcased dominance on both sides of the ball throughout the season. Offensively, the Longhorns are putting the ball in the back of the net early and often, out-shooting their opponents 117-to-59 and outscoring opponents 12-2 in the first half of matches.

On top of their impressive offensive performance, the Texas defense has stepped up their play as well. The Longhorns are 3-0 in games decided by one goal and have only allowed eight combined shots in the previous three matches, including shutout halves in four of the last six.

Head coach Angela Kelly, who has been vocal about how strong her Longhorns have played all season, reiterated her confidence with her players and Texas’ spot amongst the nations best.

“We’re really excited about where we are in the table thus far. We’re a healthy unit, we’re 6–0–1,” Kelly said. “We’re still one of those undefeated teams in the country and we’re protecting our home turf.”