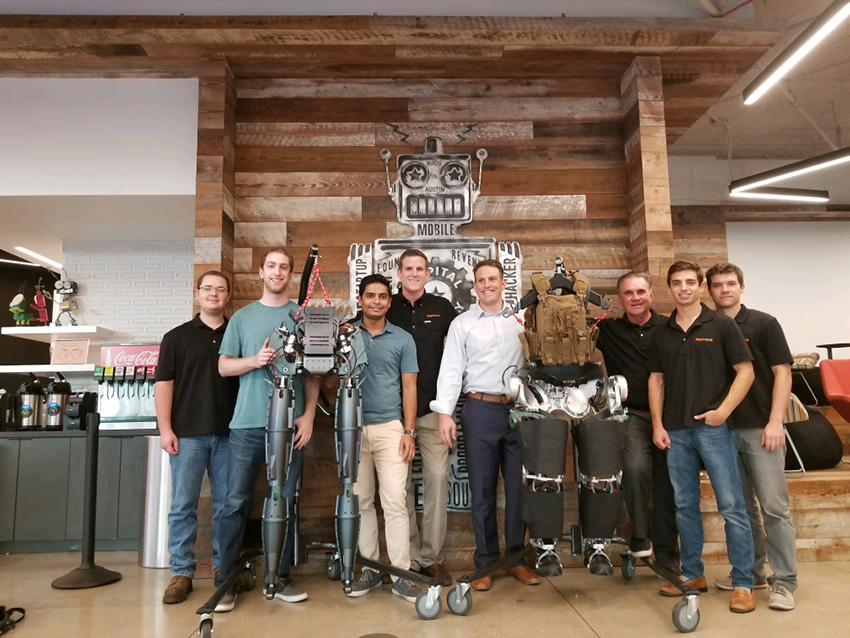 Iron Man suits, robot firefighters and robots on Mars — these are just a few of the projects associated with UT-led robotics company Apptronik Systems.

In 2016, UT-Austin alumni and one faculty member co-founded this Austin-based robotics company: Jeff Cardenas, Nicholas Paine, Bill Helmsing, Bill Welch and associate professor of aerospace engineering Luis Sentis. The company focuses on creating human-centered robots, and its clients include the likes of NASA and Lockheed Martin.

Apptronik originated from UT-Austin’s Human Centered Robotics Lab, Paine said. Human-centered robotics involves robots designed to live alongside people for the purpose of making their lives easier and safer. For instance, Cardenas said that if Mars were to be colonized, it would be safer and more efficient to have robots set up initial habitats for humans.

“The core philosophy behind the company is robots as teammates,” Cardenas said. “It’s not man versus machine, it’s man and machine. The whole idea is how can robots help us to do things — the dull, the dirty, the dangerous.”

From a technical standpoint, this means that robots must be engineered to be able to sense force and detect when they’ve come into contact with humans, Paine said. This helps to ensure that humans can be around robots without being injured.

Apptronik’s first project was working on NASA’s Valkyrie, a 300-pound humanoid robot designed first to work in environments unsafe for humans and now for work on Mars. The company has also worked on Dreamer, an advanced humanoid capable of socializing with humans and built for completing tasks, and Hume, a bipedal robot that can run agiley over rough terrain.

The company builds its innovative parts in-house — they create actuators, which are parts akin to a robots’ muscles, and controllers, which act as the robots’ nervous systems. The technology gives the robots more advanced sensing and moving capabilities.

“We try to be unconventional in the way we design things,” Paine said.

Currently, Apptronik is working on developing an autonomous humanoid robot for firefighting and logistics on naval ships. Cardenas said that the design is unique in that it’s one of few in the world to use liquid cooling instead of fans, which keeps the machine quiet, and dynamic walking, which is analogous to how humans walk. The second project is a wearable exoskeleton.

“The exoskeleton is basically an Iron Man suit,” Cardenas said. “It makes you run faster with a heavy load and it’s being developed for the Department of Defense to prevent injuries to soldiers. They can be fully bulletproof and still run full speed over long distances carrying heavy loads. This will hopefully save lives.”

Apptronik’s innovations have not gone unnoticed — the company, which has so far run without the help of investors, has been the recipient of many awards and grants: It first received the UT Innovation Grant in 2016 and went on to be a finalist in the SXSW Accelerator Pitch Event in 2018 as well as in the Greater Austin Business Awards in the innovation category in 2018.

In addition to designing robots, the company also makes robotics education and training tools. The company aims to take advanced robotics technology, like those used at NASA, and make them available to everyone. For instance, Apptronik helped Huston-Tillotson University build a robotics lab.

“A big part of our philosophy is democratizing access to advanced robotics technology,” Cardenas said. “Robotics is gonna change everything about the way we live and work and we want everyone prepared for that. We want to empower the next generation of roboticists.”