“Nothing is being done about it”: Lawrence Ross exposes widespread issue of on-campus racism 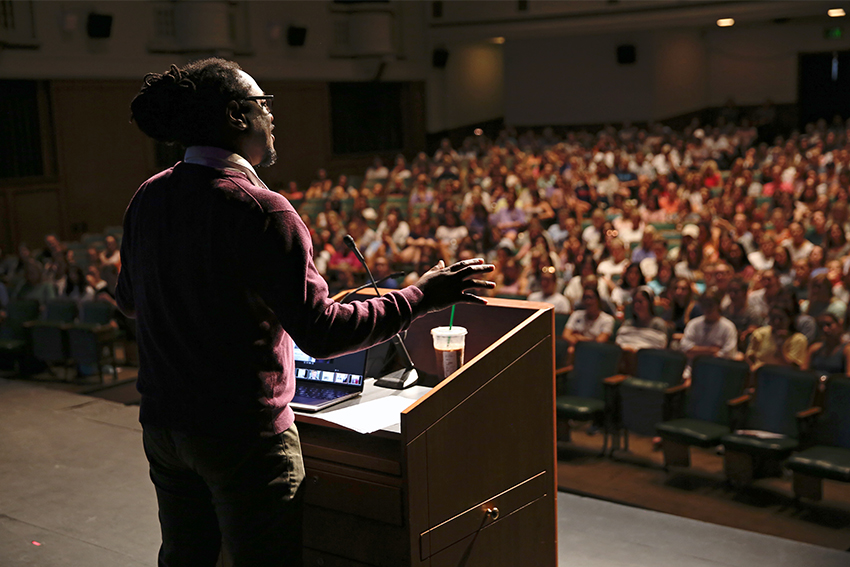 Ross, a member of the Alpha Phi Alpha fraternity, studied at UC Berkeley and UCLA and is the author of six books, including “Blackballed,” which explores the history of racism and the Black Lives Matter movement.

The presentation began by discussing an incident at Oklahoma University, where two Sigma Alpha Epsilon fraternity members sang a racist chant about lynching. Ross criticized the response to such occurrences which excuse racist actions by labeling younger white men as children.

“We want to infantile these people making these awful decisions by calling them kids,” Ross said. “That’s always the first excuse people come back with.”

Ross said similar responses to racist actions are not uncommon on college campuses across the country.

“You can’t be surprised when you see students of color protesting,” Ross said. “These things happen all the time, and nothing is being done about it.”

UPC president Evana Flores said she wanted Ross to come to UT as soon as she saw one of his presentations two years ago at Indiana University.

“He’s always been in the back of my mind. I knew we had to get him here,” advertising senior Flores said. “He does a great job of pointing out these issues and does it in a way you feel comfortable recognizing it.

Flores said one of her main goals for UPC this year is to create awareness on issues of racism and diversity.

“We all get to pick the goals for our term, and I’m focusing on diversity and inclusion,” Flores said.

“We see a lot of micro aggressions within our community, so it’s easy to say we don’t have these problems,” Brinsko said. “We’re hoping to start from the top down with changes.”

Ross said UT students have the capacity to stop racism on campus by holding others accountable.

“You have to be anti-racist,” Ross said. “You can’t be on the sidelines. You have to be willing to stand up, speak out and make change.”