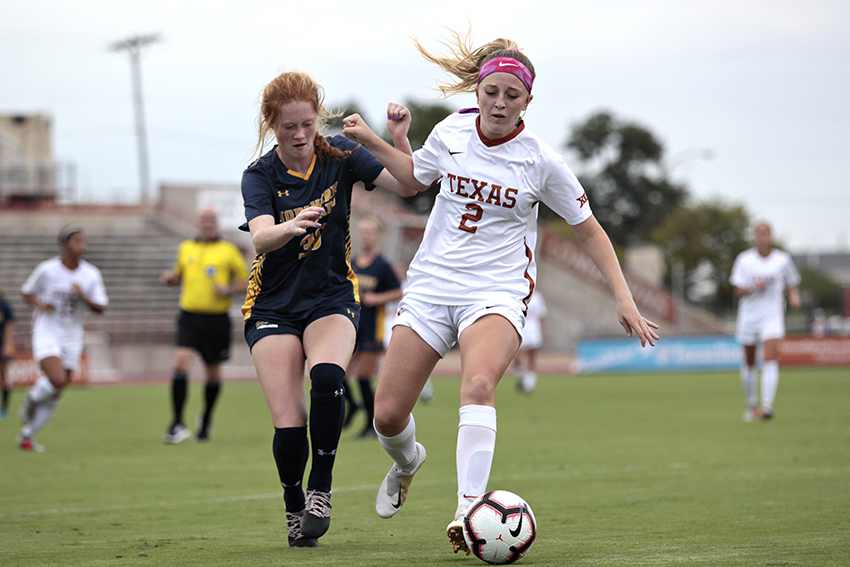 Head coach Angela Kelly and her Longhorn squad continue to find a way to win.

Fourteenth-ranked Texas finished a great weekend for Longhorn athletics with a 3-0 shutout victory against Northern Colorado. With the win, the Longhorns kept their undefeated streak alive, which is now at seven in a row after wins over the University of Texas Rio Grande Valley and Northern Colorado, respectively.

Texas’ pair of wins caps off an undefeated non-conference record for a second straight year.

“A big shout out to our fans,” Kelly said. “It’s a wonderful weekend to be a Texas Longhorn.”

It didn’t take long for the Longhorns to get going on offense against Northern Colorado on Sunday. The team’s leading goal scorer, Cyera Hintzen, put Texas out in front yet again at the seven minute mark following a great through pass from sophomore midfielder Haley Berg. Hintzen had a terrific all-around game, finishing with two goals and one assist. The junior forward leads the Big 12 Conference with eight goals this season.

The Longhorns have made a conscious effort to score early all season long.

“I think that’s a big part of our team,” said Hintzen, who scored both of her goals early in each half. “We always want to score early because that helps us get going. Our goal is to score within the first five minutes.”

Senior forward Alexa Adams solidified Texas’ lead after scoring at the 33 minute mark. After Hintzen tapped a header into open space, the senior blew past a Northern Colorado defender to win the ball and eventually finish the goal from 10 yards out. Adams now has three goals for the season.

Once again, Texas dominated the time of possession for much of the game, out-shooting Northern Colorado, 14-11, and 9-4 shots on goal. Northern Colorado managed to get their one and only corner attempt almost 80 minutes into the game.

“I think there is a fine balance,” Kelly said. “It’s a little bit like a chess match so you want to manipulate spaces and organize your players to go out of the spaces that you want to utilize.”

The Longhorn offense has been dynamic all season, having scored at least two goals in their last seven games. What is more impressive is their ability to be multi-dimensional and score in various ways. They can score with precise passing and ball control, as well as pure athleticism and speed. Kelly has managed her team to do both extremely well all season.

“There’s some times where you can catch them in transition, you can get in behind, and that’s where you have the playmakers that make these types of decisions which is really exciting because we have a lot of those playmakers on the field,” Kelly said.

The two goals came from familiar scorers for Texas. The first of the two scores came from sophomore midfielder and forward Haley Berg with the second coming from senior midfielder Katie Glenn, who was named the Big 12 Conference Offensive Player of the Week only a few days ago.

Texas now prepares for Big 12 play, which begins with a match against Baylor at Mike A. Myers Stadium at 7 p.m. on Friday.