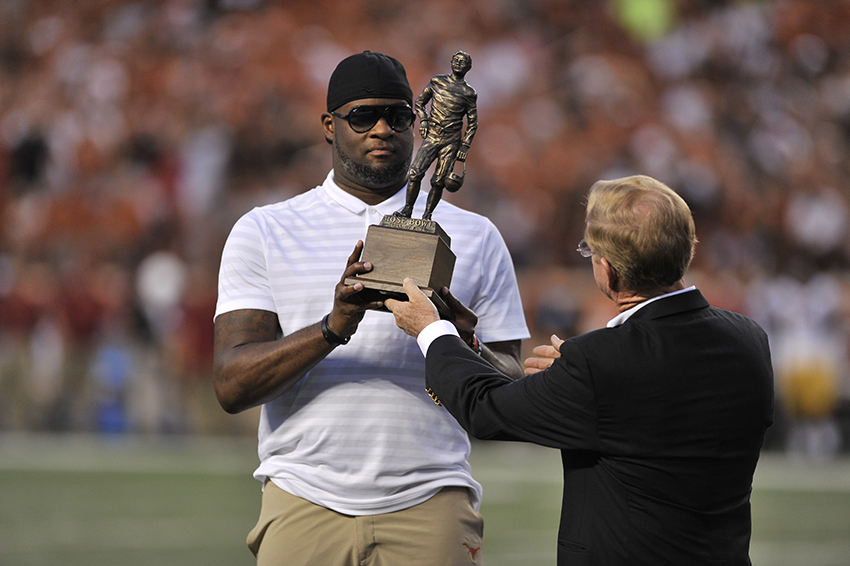 Three hours before kickoff, Texas and USC fans piled into Nissan Heisman House located outside the northwest corner of the stadium just to get a glimpse of former Longhorn quarterback Vince Young.

Young walked out on stage for an interview with ESPN’s Ryen Russillo before reflecting on the 2006 Rose Bowl. After asking several questions regarding the game, Russillo posed the question: Is there a moment from the championship game that you haven’t shared with anybody?

Young immediately discussed the challenges he faced growing up in a disadvantaged neighborhood in southwest Houston.

“My mom was strung out on drugs,” Young said. “I didn’t have a father figure in the household. Every paycheck that came in had to go to bills. We were poor.”

Young also saw his uncle get shot in the back in his house and said they had to call 911 to save his life. This all happened before Young reached college.

“These were experiences I went through as a child,” Young said. “It was only by the grace of God that I had the opportunity to be the quarterback for one of the best schools to win a national championship. That’s my best memory. God is really good. A lot of kids don’t come out of that type of situation.”

Young arrived at the University of Texas in 2003 and the rest is history. USC running back LenDale White, who played for the Trojans during the peak of the Pete Carroll era, joined Young in reminiscing about the game. Despite taking a 12-point lead in the fourth quarter, White said he still wasn’t convinced they had the game in hand.

“He was down 12, but if you look at him on the sidelines, he’s over there dancing,” White said. “For the first time in my career, I was 35-2 at the time with back-to-back championships. That was the first time in my life I said, ‘Hey, we might not be able to pull this one out.’”

LenDale was right. Young went into great detail about executing a late-game comeback en route to bringing the national title back to Austin.

Following the interview, fans in the audience were allowed to ask questions. Inevitably, the 2005 Heisman trophy, which was awarded to USC running back Reggie Bush, was one of the select topics.

“The best man won,” Young said. “I really wanted to bring the Heisman back home to Texas, but it didn’t happen like that. Reggie Bush is outstanding. Sorry Longhorn fans, we can’t have everything. I definitely wanted to win that thing, I ain’t gonna lie.”

Young was later greeted with a standing ovation by the school-record 103,507 fans at Darrell K Royal-Texas Memorial Stadium during a commercial break after being recognized for his induction into the 2006 Rose Bowl Hall of Fame.