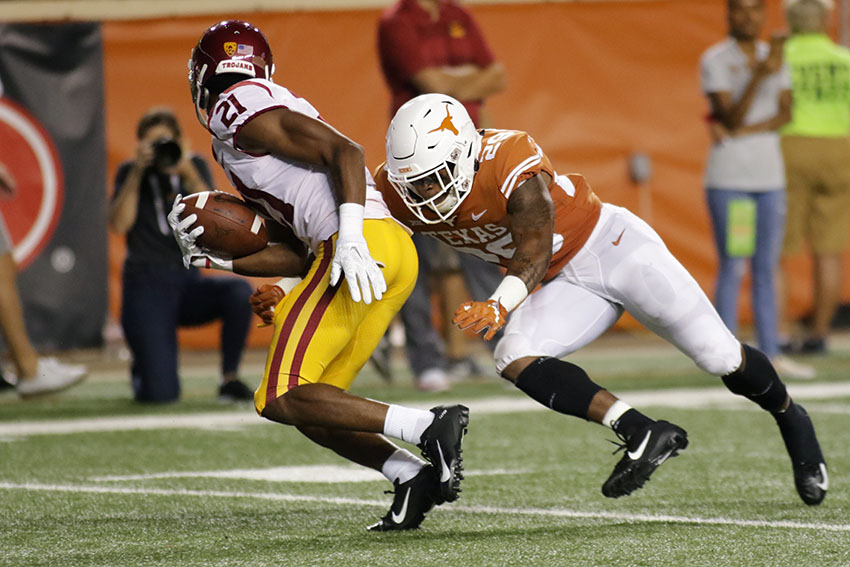 As Darrell K Royal-Texas Memorial Stadium cleared out last Saturday night, players, coaches and even fans knew what lay one week ahead.

Texas will welcome what many call one of the fastest teams in college football when No. 17 TCU arrives to Austin one week after the Longhorns’ 37-14 signature victory over then-No. 22 USC.

While head coach Tom Herman said he planned on celebrating after the win last Saturday, he already had TCU in the back of his head.

“We’re going to celebrate the heck out of this one,” Herman said after Texas’ win against USC. “It’s a great win. Again, a team that every facet had a hand in, knowing what we have coming up, starting tomorrow, allows or forces some temperance of jubilation on my part.”

Texas has a 24-hour rule, forcing players and coaches alike to move forward one day after the conclusion of their previous game. This week, that rule is as important as ever.

“That feels like ages ago, that game on Saturday,” Herman said. “This is an extremely talented and good football team that’s coming in here on Saturday. It’s our conference opener. It’s a team that quite frankly has had our program’s number for the last few years.”

When TCU joined the Big 12 conference in 2012, nobody expected the Horned Frogs to beat Texas in five out of its first six years, much less compete for Big 12 titles. TCU head coach Gary Patterson doesn’t boast a top-10, or even a top-25 recruiting class on a yearly basis, but that has not prevented TCU from dominating Texas year after year.

“Texas on paper, their recruits are higher. They’re always getting the four star or five star guys and TCU is usually bringing in more of the two star or three stars,” TCU360 sports editor Benton McDonald told The Daily Texan. “… Gary Patterson is, especially on the defensive end, one of the best if not the best coaches in his ability to mold talent and develop talent.”

All week, Texas players have been asked to explain why the Longhorns have struggled recording a win against the Horned Frogs. Senior defensive end Charles Omenihu simply stated, “They’re a good team. Obviously they have talent and they’ve just played better than us when we’ve gone against them. That’s pretty much it.”

With the Texas-TCU matchup marking the beginning of conference play, both teams have more than enough to play for. Texas is looking to string together back-to-back wins over ranked opponents and three straight wins for the first time since 2014.

“They (TCU) will be ready to prove themselves because Texas is coming off of that win against USC,” McDonald said. “People are saying Texas is back, Texas is ready to go, that was Tom Herman’s biggest win, I think they hear all of that. They’re kind of ready to show them that TCU is still the better team in this rivalry and Texas can beat all the ranked teams that they want, but TCU is still going to bring their talent and their speed to Austin.”

TCU brings a young quarterback in redshirt sophomore Shawn Robinson. In the Horned Frogs’ primetime game against No. 4 Ohio State last week, Robinson threw for 308 yards, but also finished with two interceptions. On the defensive end, the Horned Frogs will present what Ohio State defensive tackle Dre’Mont Jones called, “The fastest team I’ve played since I’ve been in college.”

“That group is continuing to grow,” offensive coordinator Tim Beck said. “They’re starting to get consistent. This will be a big challenge for them and they know it. They’ve gotta come.”