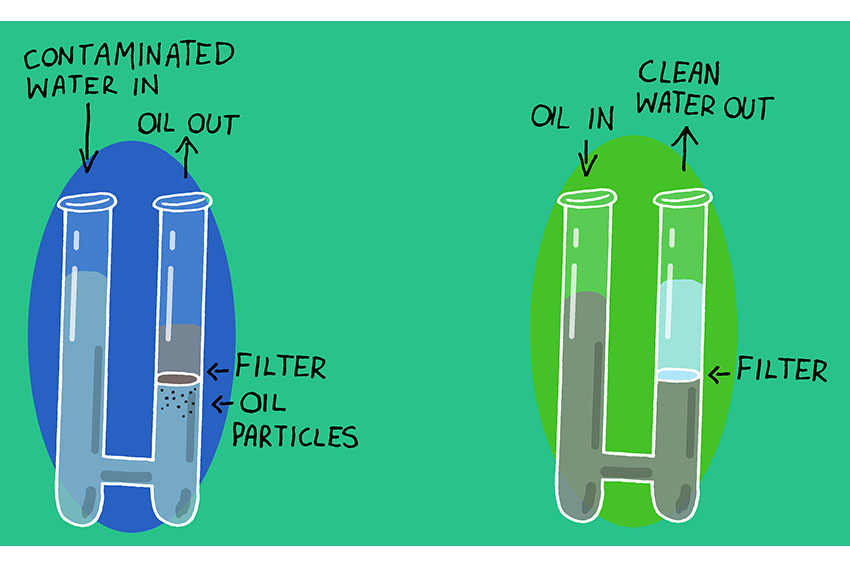 An explosion at the Deepwater Horizon drilling rig in the Gulf of Mexico leaked thousands of gallons of oil into the ocean in 2010, according to National Public Radio. This resulted in a three-year-long cleanup project costing over $14 billion dollars, said CBS. UT researchers said they aim to improve future oil spill cleanups and water conservation methods by filtering water from oil cheaply and more effectively.

The technology turns conventional water filtration on its head, Dr. Frank Seibert, technical manager of the Separations Research Program and researcher on the project, said.

“We’re doing things opposite of what people would teach you,” Seibert said. “We are permeating oil with as low of pressure as possible; using 10 times less pressure (than conventional methods) to drive oil through.”

Conventional systems of water filtration rely on substantial pressure, which pushes contaminated water through the filter, also known as a membrane, resulting in oil on the other side. Seibert’s method, however, uses minimal pressure to conserve water usage and allows oil to flow through the membrane and produces clean water, he said.

“What we’re doing is allowing the oil to adhere to the fibers of the membrane, which lets the oil stick to the surface,” Seibert said. “Then we add just a little bit of pressure to help the oil go through the walls of the membrane.”

This low-pressurized system filters water at a cheaper cost and produces usable oil, resulting in several UT patents on the process, he added.

“When it comes to conservation, companies are always looking for cost-effective methods,” Seibert said. “We can also produce clean oil, which the company can sell. With other methods they can’t.”

Seibert collaborated on this project with UT professors Dr. Kerry Kinney and Dr. Lynn Katz of the Department of Civil Architectural and Environmental Engineering. The two originally approached Siebert about 11 years ago with an idea to separate algae from water, but the study failed. This experiment gave the three researchers the idea to separate oil from water.

Seibert said this technology could potentially be used in oil spill cleanup projects, which requires unique technology that is compact, low-energy and able to handle large water flow.

“Right now, if you have an oil spill, it’s very difficult to clean up,” Siebert said. “Dr. Katz, Dr. Kenning and I ultimately have the same goal: We want to develop technology that can be utilized in the cleanup of oil spills.”

Future research will look at how to handle solids in the filtration process and will work with industry to do field tests, he said.

“There’s a tremendous amount of collaboration with industry as well as with other professors here at UT,” Seibert said. “It’s really a nice model for how universities should work, especially with engineering.”