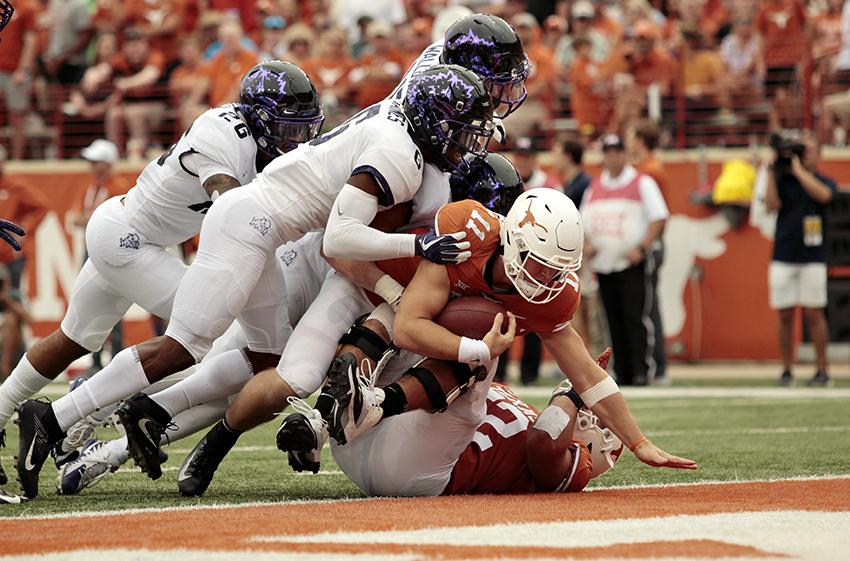 There’s one question Texas players and coaches most frequently answered this week: How would this team respond after a win over USC when a bigger, tougher opponent in TCU was lurking ahead?

To the delight of an exuberant Texas crowd, the Longhorns answered that question by giving one of their most complete, all-around performances in recent memory.

Sophomore quarterback Sam Ehlinger took a knee on the final play as the rest of the Longhorns walked onto the field to celebrate the 31-16 win over the No. 17 Horned Frogs. The victory marked the program’s first three-game win streak since 2014 and its first time beating Top 25 opponents in consecutive weeks since 2008.

“I think it’s a huge win,” junior safety Brandon Jones said after the win. “Me being a junior, that’s my first time actually beating them so it’s a great team win overall. It shows when we, special teams-wise, offense and defense, we can all come together and we’re really good and hard to beat.”

The game, which was Texas’ first win over TCU in five seasons, reached its most defining moment during a 2nd and 7 play for the Horned Frogs. After a missed field goal from freshman kicker Cameron Dicker two plays before, sophomore quarterback Shawn Robinson and the TCU offense took possession, looking to increase the team’s 16-10 lead during the third quarter.

Taking the snap from a shotgun formation, Robinson followed his right tackle, rushing up the middle until sophomore defensive end Marqez Bimage reached in and stripped the ball from Robinson’s hands. Jones quickly recovered the ball, setting the Texas offense up for another opportunity to shift the momentum.

A few plays later, Ehlinger took advantage by launching a deep throw only junior wide receiver Collin Johnson could get by making a diving grab in the endzone. The score gave Texas a 17-16 lead — one that stuck for the rest of the game.

“You know, the offense wasn’t moving the ball at some points, kept punting,” senior safety P.J. Locke said. “And we just kept telling them, ‘We’ve got y’all’s backs.’ We knew they were going to get it together just from how we practice and how we embrace the word ‘finish.’”

From there, freshman Caden Sterns repaid the offense for the score by intercepting Robinson on the next possession and returning the ball to the three-yard line, setting Ehlinger up for a two-yard touchdown run which was the Longhorns’ second touchdown in 17 seconds of game time.

“You start off 0-8 on third down, there’s going to be a lot of doubt that creeps in,” head coach Tom Herman said. “But I think we were confident in the way we prepared, and we were confident that if we just went out and continued to stick to the game plan that the plays would start going our way.”

The Texas offense grew stagnant during the end of the second quarter into the beginning of the third as they had three-straight possessions resulting in three-and-outs. But as they have done in back-to-back games now, the Longhorn defense helped the offense rebound from early struggles to finish when it was most important.

“We knew and we prepared our guys that this was not going to be a 45-7 game,” Herman said. “I mean, this was going to be an ugly, hard-fought, physical game, as all games against TCU are. And the defense kept us in it when we were finding our way a little bit offensively.”

If the Longhorns’ win over USC was one step in the right direction, the dominating finish against TCU has the team on the right track toward potentially competing for a Big 12 Championship in December.

“It feels amazing. I feel real good — you see I’m smiling,” senior cornerback Kris Boyd said. “I’m just happy for everybody, my whole defense. Offense, they did well too. We’ve been pretty much executing across the board.”