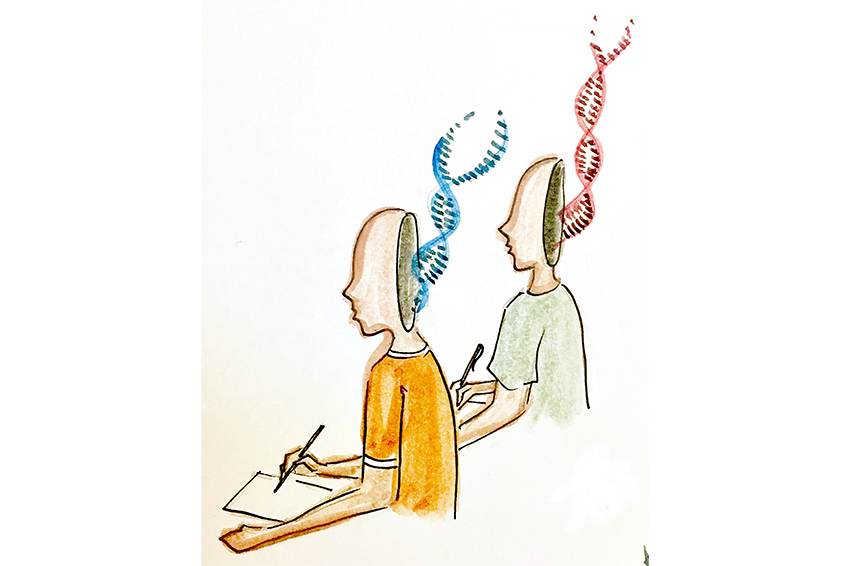 Good grades are genetic, according to UT research.

A newly discovered genetic component of academic performance could change the approach to childhood education, according to a new study. Margherita Malanchini, UT psychology postdoctoral researcher, in collaboration with King’s College, London, found that the majority of differences in school achievement can be attributed to genetics.

They found that twins who have identical genetic profiles and were raised in the same environment performed to a similar degree in school. According to the study, educational achievement also remained stable throughout multiple levels of schooling, so exceptional test performance in primary school often foreshadowed success in higher education as well.

Malanchini attributes genetic factors to this consistency in academic success.

The study analyzed over 10 years of test score data from 6,000 sets of twins and correlated their test performances to their DNA sequences. The researchers analyzed several traits related to performance. They grouped these into cognitive traits directly related to mental function, such as critical thinking skills, and noncognitive traits, such as personality.

Twins are ideal study subjects for this topic because they share 100 percent of their genes, according to Malanchini.

“(If) identical twins are more alike on a particular trait than non-identical twins, such as school achievement, we can infer that it is influenced by their genes,” Malanchini said. “We can then estimate the heritability of that trait — or the proportion of differences that are down to the differences in children’s DNA sequences.”

Malanchini added that people who are born without the required traits for success aren’t doomed to failure because differences in school achievement can also be explained in part by environmental factors. According to the data, as twins grew and spent less time in similar environments, a gap began to appear in their academic performances. Malanchini said this long-term academic performance data was necessary for drawing conclusions about the effect of genetics over an individual’s entire career.

“Much less is known about … what factors contribute to stability of change in performance at schools,” Malanchini said. “Here we used both the twin design and DNA-based methods to answer these questions.”

Linking genetics to academic achievement could change how educators approach primary education, Malanchini said. This will help students who are lacking certain genetic factors for academic success and normalize their performance over time.

“In the future, score prediction, together with the prediction of environmental risks — such as exposure to certain neighborhood, family and school characteristics — might provide a tool to identify children with educational problems very early in life,” Malanchini said.

This data can then be used to provide individualized learning programs, Malanchini said.

“Our findings, which suggest that genes influence how well a child will do across the length of their time at school, should provide additional motivation to identify children in need of interventions as early as possible, as problems are likely to remain throughout the school years,” Malanchini said.