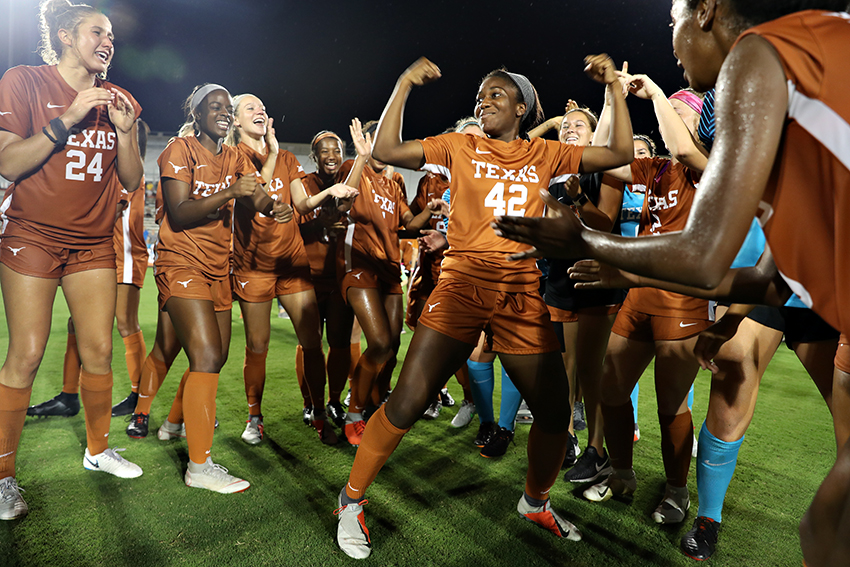 No. 11 Texas opened up conference play Friday with an incredible 2-1 comeback victory over Baylor in overtime at Mike A. Myers Stadium.

“Really proud of our squad,” head coach Angela Kelly told Texas Athletics after the game. “The way they came out courageous in the second half, that’s all we ask of them in the locker room.”

The Longhorns conceded the opening goal at the 14-minute mark. Following a perfect cross from the right side, senior midfielder Julie James shot a running header from 6 yards out to put Baylor in front.

The Bears controlled possession for much of the first half, out-shooting Texas 8-6 and 3-1 in shots on goal. However, Texas was a different team in the second half.

Freshman forward Mackenzie McFarland has provided a spark off the bench for the Longhorns all season long, and she did it once again Friday. McFarland scored the equalizer following a corner kick from junior defender Emma Jett. McFarland was in the right place at the right time, putting the ball away after the it ricocheted back to her from 4 yards out.

Even though 90 minutes was not enough to decide the nail biter, it took just 30 seconds into the overtime period to finish it. Following a cross from junior forward Cyera Hintzen, sophomore forward Cydney Billups tapped the ball into the back of the net to score the game-winning goal.

Billups immediately sj jumped into the arms of sophomore forward Haley Berg as the rest of the Longhorns rushed to celebrate, eventually piling on top of Billups.

As a MAC Hermann Trophy Watch List candidate and the Big 12 leading goal scorer, Hintzen put her stamp on the game with two assists, including one that led to the game-winning goal by Billups.

Texas soccer was not alone in celebrating their comeback victory. The Longhorns had their largest fan turnout of the season with 1,842 in attendance.

“I want to shout out to all of our Longhorn soccer nation fans,” Kelly said. “Tremendous turnout tonight, thank you guys very, very much. You mean more than you can even imagine.”

Texas now faces a tough, four-game road trip ahead, starting with Oklahoma State — the top-ranked team in the Big 12 standings. The Longhorns’ perfect record will be put to the test, but Kelly looks   toward her leaders just as she has done all season long.

Texas will travel to Stillwater to take on Oklahoma State on Friday at 7 p.m.