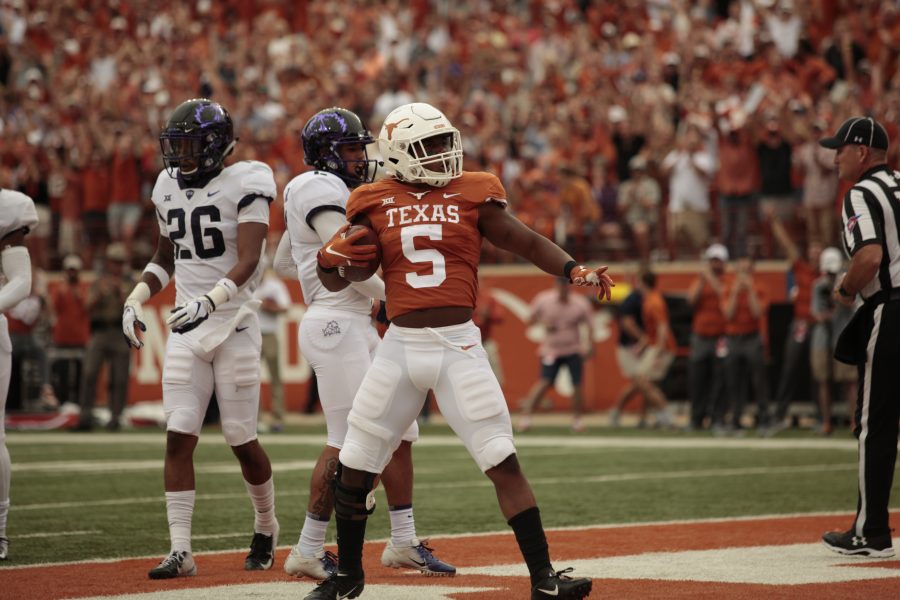 The phrase ‘Texas is back’ was created two seasons ago, and it has haunted Longhorn fans ever since.

The infamous phrase was coined by ESPN announcer Joe Tessitore the second Texas took down then-No.10 Notre Dame in 2016. It truly had the Longhorn faithful believing former head coach Charlie Strong was finally building something in Austin.

Texas fans bought in. What they didn’t know at the time was that Texas would lose to Kansas that same season, or that ‘Texas is Back’ was going to linger over multiple seasons, win or lose.

“In the locker room, people understand when we win games people are going to say, ‘Texas is back,’ and when we lose games we’re the worst thing that’s in America,” junior wide receiver Collin Johnson said. “That just comes with playing at Texas.”

When Texas took down then-No. 22 USC last week, it served as the Longhorns’ first signature win dating back to the day the phrase was created in 2016. Texas fans were warned to tread lightly as they entered the matchup with No. 17 TCU, a team that has dominated Texas year in and year out since 2013.

As the third quarter came to an end, though, the Longhorns held a 24-16 advantage. Between quarters, the entire team huddled up on the sideline and held four fingers in the air. It’s not an uncommon gesture in football, indicating the start of the fourth quarter, but for Texas, it emphasizes one of the team’s mottos for the 2018 season: finish.

“Last year I wasn’t here, but they had a lot of games where we were winning in the fourth and then we weren’t able to finish,” Tre Watson, a graduate transfer running back, said. “This year they’ve been preaching that a lot. That’s the main thing, finishing. We have it on the back of our shirts. That’s the mindset we come out, we focus on the fourth quarterback because that’s when the dogs come out.”

Fifteen minutes later, as the clock hit triple zeros, Texas celebrated the end of the four-game losing streak to the Horned Frogs. Saturday’s performance also marks back-to-back wins over ranked opponents for the first time since 2008.

“In the past, we’d beat a ranked opponent, then blow it away the next week,” Johnson said. “Seeing us do this tonight is another step. We’ve just gotta keep building these steps week in and week out. This win meant a lot. It was really an early birthday gift.”

The Longhorn defense decided to give Johnson early birthday gifts too — four to be exact.

The Longhorn defense gave up 13 points in the first half but followed it up by shutting down TCU in the second half. The Horned Frogs only managed to put up one field goal for the rest of the night en route to Texas’ 31-16 win.

Neither Texas players nor coaches seem interested in entertaining the question, “Is Texas back?” just yet. In fact, they won’t be ready to seriously consider any claims for another couple of months.

Herman will stay true to his motto in going 1–0 every week. However, he will never shy away from celebrating a win. Texas’ 24-hour rule wasn’t even close to expiring when he walked into the Longhorn locker room after their victory. And he took advantage of it.

Redshirt sophomore offensive lineman Tope Imade tweeted out a video of Herman shoving his way into the middle of the dance circle and flashing some moves alongside senior cornerback Kris Boyd. The caption read, “Another great win. Love this team. Deleting later.”

Moments later, Herman walked into the post game press conference. He had a business-as-usual tone in his voice and admitted they have a long way to go, but these two weeks might have put Texas back on track.

“All this does is validate the fact that we have taken another step, that’s all,” Herman said. “We have got many, many, many steps left to take.”