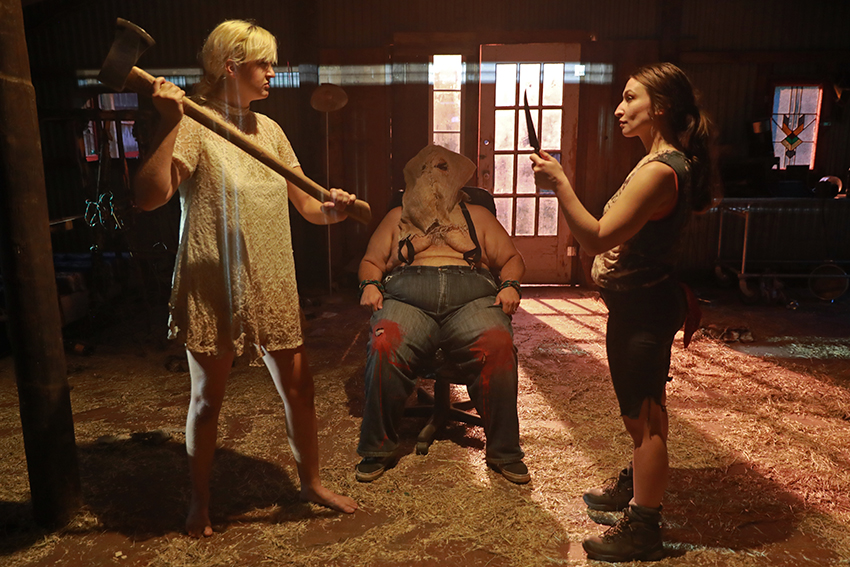 Editor’s note: The play “Black Dog” is for 18+ audiences only. Along with violent themes, the play contains nudity.

New from Austin’s own Bottle Alley Theatre Company is a thrilling one-scene play about two women murdering men and eating their corpses. By the end of “Black Dog,” one thing’s for sure — you’ll never think about banana bread the same.

Set in rural America, the play opens with a young woman named Ophelia gushing about all of the foods she plans to make out of the man behind her. She talks about her past, giving brief glimpses of how she became a cannibal, until her partner in crime, Rainey, comes and monologues her own twisted backstory.

Written by Bottle Alley’s director Chris Fontanes and directed by Dani Stetka, “Black Dog” is an example of how an enthusiastic cast and crew bring a script to life and create a work of art. Stetka said Fontanes’ script leaves room for interpretation.

“One of the things that’s great about Chris’s writing is that you get a baseline but it could go so many different ways,” Stetka said.

While the play was an opportunity for varied interpretations, actor William Reed said he was intimidated by the script. “There was so much blank on that page, it frightened me,” Reed said.

For example, one of the biggest ambiguities of the script is whether Reed’s character, Sam, committed a crime or not. While the murderers are sure he did, it’s left open to interpretation.

The Bottle Alley Theatre Company is proud to be “specialists in found theatre,” meaning that the company seeks out strange locations for their plays instead of actual theaters. “Black Dog” is set in The Barn, a barn at a bar just outside of Travis county. After the doors shut out the food trucks and bustling bars, the mustiness and silence of the barn lend the play so much of its creepy nature and eerie atmosphere.

The characters Ophelia, played by Rachel Holderbach, and Rainey, played by Sara Cormier, are the driving forces of the story. Both characters are young women who murder sexual predators in response to their own backstories as sexual assault victims. Although the play does not specifically mention the #MeToo movement, it takes place in a vaguely modern and American setting.

Holderbach said the characters are “exploring the psyche or fantasy life of people who have experienced trauma.”

Stetka said she wanted to illustrate the complicated psyches of the characters through the subtle interactions which Ophelia and Rainey share.

Stetka said the dynamics between the two women were a crucial role in the story, and consequently the deciding factor for the audition. Ophelia and Rainey make up the meat of the play — pun intended — so the ability to express the complicated relationship that the women share with each other is important, even when there is little actually said about their relationship in the text itself.

Perhaps the play’s most puzzling aspect is its focus on cannibalism. It’s one of the creepiest parts of the play, especially with both characters perpetually waving around knives and axes.

“It’s hella practical,” Holderbach said. “There’s something about eating fear. Fear changes the way meat tastes — they might be addicted to it.”

On the other hand, Cormier said the cannibalism suggests a need for dominance. The women are retaking control over their lives after the trauma of their sexual abuse, a timely theme in wake of the #MeToo movement.

“You think about the food chain and human beings, we should all be on one level,” Cormier said. “But these women, the fact that they have power over their victim at the time, they are higher on the food chain.”

“Black Dog” is a thought-provoking and thrilling play any horror fan would love.