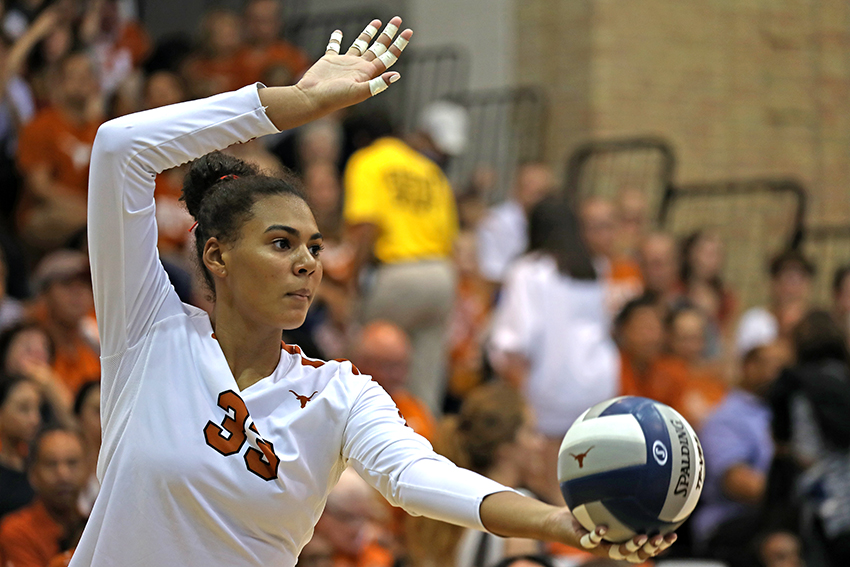 One would think that after playing six ranked teams in the first nine games of the season, it would be nice to take it easy and play some less talented squads. But instead, the Texas volleyball team embraces the challenging slate of games.

The Longhorns are set to host their seventh ranked opponent this season in the No. 19 Baylor Bears on Wednesday.

The Big 12 is not as powerful as other conferences in terms of level of competition, so in the rare event a ranked conference opponent appears on the schedule, Texas must capitalize.

“I think it’s super important just because we don’t have as much competition as like the Big Ten or the Pac-12,” freshman outside hitter Logan Eggleston said. “Every team is going to play their best match against us, so we have to come in and play our best match against them too.”

The team is coming off of an electric five-set victory over Kansas State on the road to open Big 12 play. For a team favored to win its seventh conference title in the past eight years, the win showcased the team’s ability to climb out of a hole after losing the first set.

The win last week was the second five-set match the team has played so far this season, also winning in the first week of the season against No. 11 Florida with a come-from-behind effort. If the team can continue to win close games, there is no limit to what can be accomplished.

“It was awesome,” Eggleston said. “They came out and played a great game, and we did a great job of coming together through adversity and pulling out a win.”

The match against Kansas State was the sixth victory for Texas this season, coupled with three losses against teams currently ranked within the top six of the NCAA rankings. The team is well on its way to justifying its preseason No. 1 ranking in the Big 12.

Additionally, last week’s win represented the sixth road game for the team. The team has traveled more than it has played at home, and returning to Austin could prove favorable for the squad. Winning on the road for the fifth time was also incredibly important to the team’s goals.

“It definitely was,” Eggleston said. “I think everyone kind of came together to show how important everyone is to the team on the road.”

After Baylor, the team will play four of its next five games on the road, with visits up north to Oklahoma and TCU. However, the team cannot look past this week’s game, as each game is a challenge of its own.

First serve against Baylor is slated for 7 p.m. at Gregory Gymnasium.