‘We still have work to do’: Bill Snyder continues building legacy at Kansas State 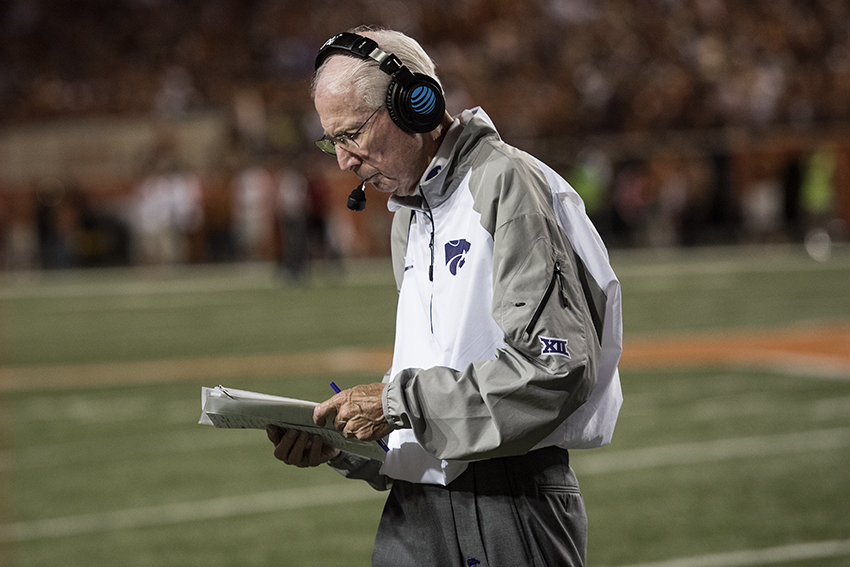 When Kansas State head coach Bill Snyder spoke at Big 12 Media Days in July, he didn’t sugar coat anything. He was concerned.

It wasn’t regarding the quarterback battle between Alex Delton and Skylar Thompson, which is still ongoing despite Snyder deciding to go with Delton for Saturday’s game.

Snyder turns 79 on Oct. 7, but the concern wasn’t surrounding his future at the only school he has coached at since 1988, either. For Snyder, his concerns were about priorities — in college athletics and education.

“You look at it from a standpoint of if I’m a professor at a university, I’m going to ask the question: What’s really important here? Is it education or is it football?” Snyder said during Big 12 Media Days. “A professor that has an office the size of a closet, and as coaches we’ve got offices as big as an indoor facility, you ask the question: Why?”

USA Today ranks and releases a chart of coaching salaries throughout the country annually. Texas head coach Tom Herman topped coaching salaries in the Big 12, raking in $5.25 million in his first season with TCU’s Gary Patterson right behind him.

Snyder sits at the bottom of the list among Big 12 coaching salaries, but at $3.2 million a year, he knows he is a part of the problem.

“You can only build a palace so big,” Snyder said. “You can only pay people so much money. It’s kind of interesting. I guess I can’t speak for the other coaches, but I’m grossly overpaid. I know that.”

Whether Snyder likes it or not, Kansas State’s 50,000-seat stadium has his name in bold letters across the front of the stadium along with a life-sized statue placed at the stadium’s entrance.

“Bill Snyder is a Hall of Famer,” Texas head coach Tom Herman said. “His name is on the dang stadium. He took over a program that was literally the worst in college football and turned it into a conference, national championship contender. … And the fans are great. It doesn’t matter what their record is, they’re going to show up, and they’re going to be loud, and they’re going to try to make an impact on the game.”

In 1988, Snyder took over what many considered the worst college football program in the country after the Wildcats failed to win a single game the season prior. Five seasons later, he took his team to a bowl game, and a decade later, he ripped off six 11-win seasons from 1997–2003.

It’s been over three decades since Snyder arrived in Manhattan, and he’s still there.

“Nothing he does surprises me,” West Virginia head coach Dana Holgorsen said at Big 12 Media Days. “I watched him coach as a kid. He’s one of my heroes. As a small kid in Iowa, I watched his career. He’s as resilient as resilient gets. I won’t do it when I’m 79. I’ll be lucky to be here when I’m 79.”

When it comes to Snyder’s long term plan, though, that future isn’t nearly as clear. However, Snyder successfully beat throat cancer in 2017 and recently signed another contract that will keep him coaching until he is 83.

Whether Snyder plans on finishing out his contract is yet to be determined, but it begs the question: With the decades of accomplishments, what keeps him going?

“Just about every season, I’ll get asked about my future with the program,” Snyder wrote in a letter featured in The Players’ Tribune. “People wonder what, after all these years, keeps me motivated each day to continue coaching. The answer is simple … we still have work to do.”