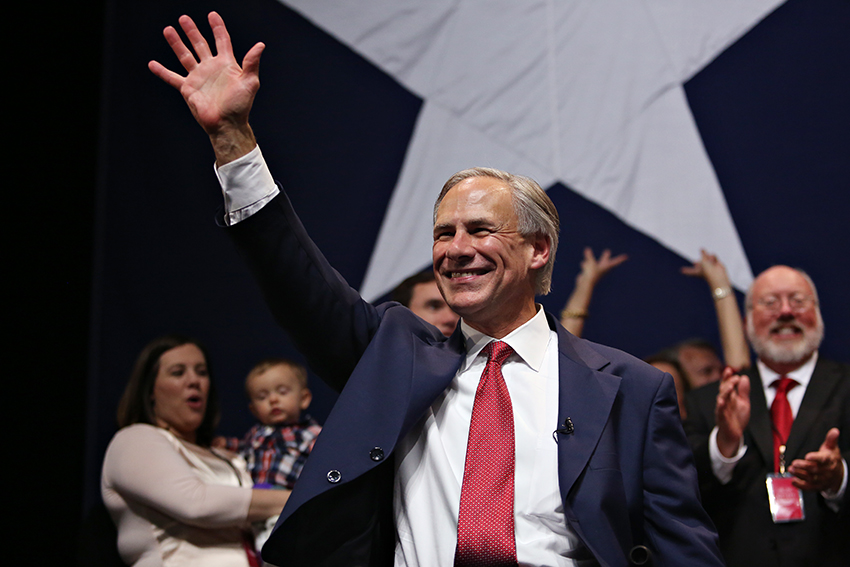 Throughout the hour-long debate, the candidates clashed over topics such as school safety, gun reform, immigration and disaster relief post-Hurricane Harvey. The debate was moderated by Robert Hadlock of KXAN in Austin who was joined by a panel of reporters from across the state.

The first question of the night concerned keeping students safe in the aftermath of school shootings in Parkland, Florida and Santa Fe, Texas. Abbott said he supports arming teachers in Texas but believes schools should choose for themselves whether and who to arm.

“Arming teachers is one of the proposals that came out of three days of roundtable discussions I conducted in Santa Fe,” Abbott said. “I went to the school, I hugged those kids and I talked to the parents and the teachers about meaningful solutions. Schools are a place to learn, not a place for fear.”

Valdez agreed that students should feel safe at school, but she said arming teachers is not the solution.

“Teachers should be teaching, not armed,” Valdez said. “There should be some defense in place but … if (teachers) wanted to be armed, they should have joined the military.”

The candidates also discussed lessons learned in the wake of Hurricane Harvey. Valdez condemned Abbott for not doing more to help Texans in the aftermath of the storm and for not tapping Texas’ roughly $10 billion Economic Stabilization Fund, also called the Rainy Day Fund for more immediate aid.

“The Governor calls (a) special session for bathrooms but not when people are dying,” Valdez said. “The Rainy Day Fund is the biggest savings account in the United States, and Governor, it rained!”

“The Governor has the authority to spend state money without having to call a special session,” Abbott said. “We amassed the resources not just to rebuild Texas but to build Texas better than it was before Hurricane Harvey struck.”

Abbott spoke briefly about his agenda for 2019. He said the bathroom bill "is not on my agenda,” but did not specify whether he would sign one if it got to his desk.

Both candidates agreed that separating families at the border is “cruel.” However, they disagreed on whose responsibility it is to address.

Valdez said the state, not just Congress, has a responsibility to address the situation at the border.

“We both agree that we have a broken immigration system, but we don’t agree on the things we can do in Texas to stop some of that cruelty,” Valdez said. “Family separation was cruel, period.”

Kathleen Doviken, communications director of University Democrats, said Valdez embodies the kind of Texas she wants to live in. She said Abbott’s response to questions about a future bathroom bill show that he does not support creating a more inclusive state.

“(Abbott’s) complete refusal to answer the question about the bathroom bill and saying that he doesn’t want to comment on hypothetical bills is upsetting,” French senior Doviken said. “We all know that means he would sign it if it got to his desk, which shows that he really doesn’t care.”

Saurabh Sharma, chairman of UT’s chapter of Young Conservatives of Texas, said Abbott performed well during the debate, demonstrating mastery of the issues at hand.

“His command on the issues shows how seriously he takes this job,” biochemistry senior Sharma said. “Frankly, I think Valdez fumbled quite a bit. It’s very clear she isn’t actually interested in the nuts and bolts of being governor of a state as complex as Texas.”