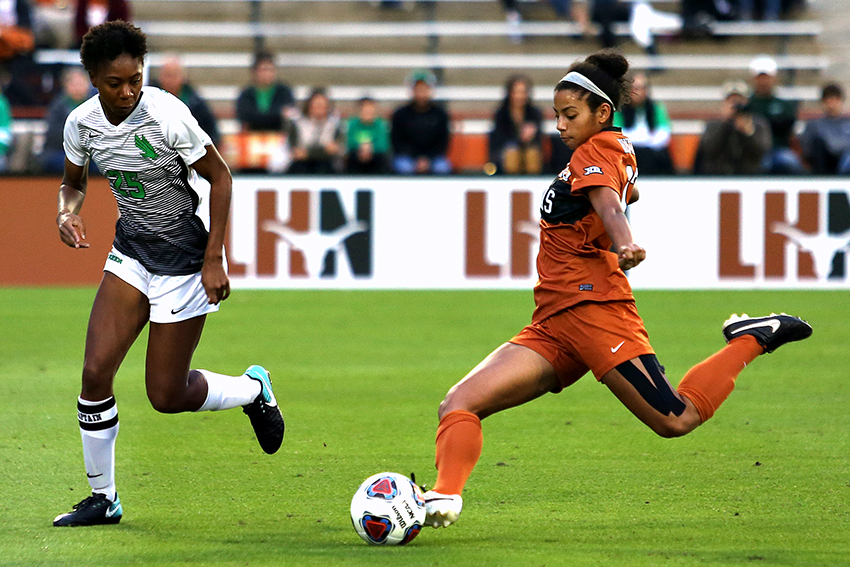 No. 8 Texas managed to tie a physical No. 13 Oklahoma State squad Friday night thanks to the Big 12’s leading goal scorer, Cyera Hintzen. With the draw, Texas keeps their undefeated season alive.

“That’s one of the most physical games I’ve ever been a part of, playing or coaching, to be honest,” head coach Angela Kelly said.

The Longhorns committed 16 fouls, which was the most they have committed since their match against then-No. 4 ranked UNC when they committed 17 fouls.

Texas was without talented freshmen Julia Grosso and Emma Regan for the second straight match. Grosso and Regan are currently representing the Canadian Women’s Senior National Team at the upcoming CONCACAF Women’s Championship. The freshmen duo will also miss Sunday’s match against TCU.

“The ultimate goal is to represent your country in a World Cup or Olympics,” Kelly said. “Obviously, you miss the quality of two international players just in what they can add to the environment, to the match in their experience.”

Though she was incredibly proud of the two players, Kelly adjusted her lineup accordingly by starting senior Amber Stearns and moving midfielder Haley Berg to the forward position.

Texas fell behind in the first half at the 22 minute mark, conceding an own goal after Oklahoma State cross landed into the 18-yard box. A Texas defender, in an attempt to win possession, headed the ball into the team’s own goal, giving the Cowgirls their only point of the match.

After seven shot attempts following the own goal, the Longhorns finally broke through Oklahoma State’s stubborn defense on their eighth attempt at the 76-minute mark. Following an approach by junior defender Atu Mshana, Hintzen played a beautiful chip past the charging goalkeeper and into the far post to level the score, 1-1.

“Really proud of the perseverance of our team to come back after one goal down,” Kelly said. “To find the resiliency to put an absolute world-class goal away once again by Cyera Hintzen, just world class.”

Both teams played aggressively throughout the match, with Texas outshooting Oklahoma State 18-14. However, Texas only recorded five shots on goal while OSU tallied three.

Texas looked to steal the game away from the Cowgirls, but after two grueling overtime periods,  the teams finished in a 1-1 tie.

Texas walks away from Stillwater with a point, but the schedule doesn’t get any easier for the Longhorns as they continue their road trip on Sunday against another tough opponent, TCU.

“This is the toughest conference in the country,” Kelly said. “It’s going to be like this every single match. It’s incredibly tough to get any points, let alone points on the road. We’re going to take this point and move forward and quickly organize for a well-coached, talented TCU squad on Sunday.”