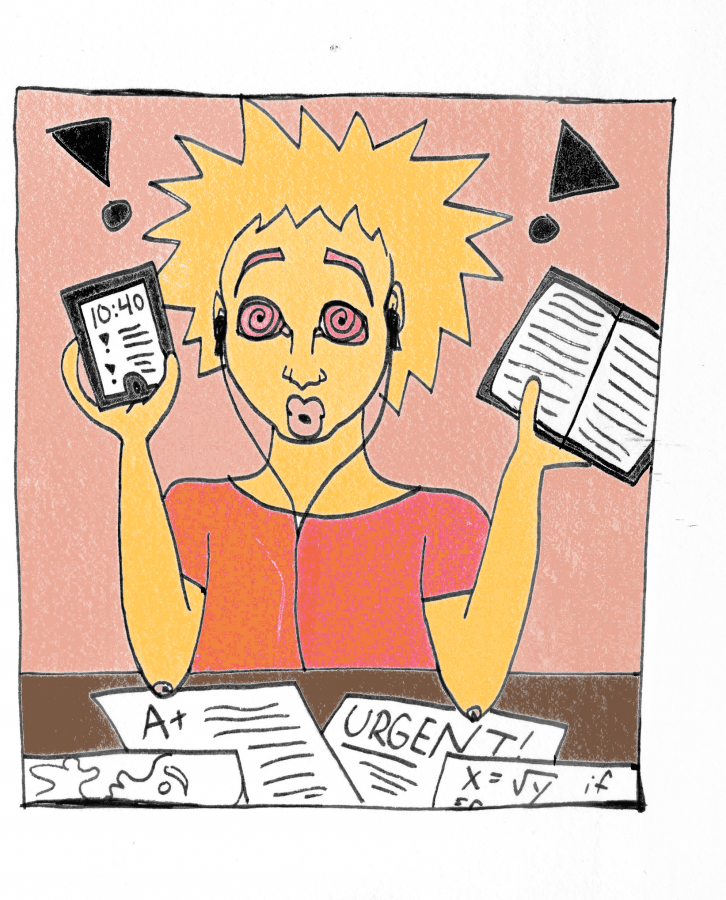 Just walk down Speedway or stick your head into the PCL. You’ll see people doing multiple things at once — such as reading and listening to music or talking and studying. Every day, students multitask, but we have to avoid juggling too many things at one time to reap academic benefits.

“Students and people in general are trying to get things done in a particular time frame. There are fast and slow things happening, which gives us the feeling that you can handle those things at once,” assistant psychology professor Jessica Church-Lang said. “We are becoming more used to being able to juggle more than one thing because it seems more efficient. However, it’s causing us not to produce 100 percent while studying and doing other important things.”

Many professors don’t have strict electronic policies. In big classes, it’s almost impossible for your professor to see you send a forehead selfie on Snapchat or leave a comment on your friend’s Instagram post, so you do it. You pull out your phone and miss important material that’ll probably be on a test. To be successful in college, we have to have self-control and know when it’s time to focus.

“Multitasking is hard because it causes sensory overload, so when you’re doing one task but then switching over to another task, you think you’re focusing on both, but you’re not,” advertising freshman Avery Johnson said. “Students are terrible at multitasking, but think they’re more than capable.”

The main distraction from studying is phones. On a daily basis, college students send approximately 97 text messages. Seventy-one of these are sent while doing homework.

“These days, the world is such a dynamic space. Things happen so instantaneously in the world of social media, which generates the fear of missing out,” Church-Lang said. “This really makes it hard to sequester oneself from the phone for a while and focus on studying.”

Multitasking has been scientifically proven to be ineffective. Humans brains are wired to be mono-taskers. We’d like to think that we can handle doing multiple things at once, but in reality we’re just doing one thing right after another at rapid speed. This can eventually lead to brain damage because your brain has to work extra hard.

There’s also proof that multitasking is dangerous. In Texas, there have been hundreds of deaths and thousands of injuries because of texting and driving. And in the US, multiple fatalities have occurred due to crossing the street while talking on the phone.

The best way for students to stop multitasking is by being more mindful and learn to approach things one at a time. During the time that you study, it’s highly unlikely to miss something significant happening in the world. You don’t need to be staring at your phone while crossing the street or updating Twitter while in class. Devoting your time to one task, finishing it and then moving on to another will make you realize that putting your full attention to a singular thing works best.

Pape is a journalism freshman from San Antonio.