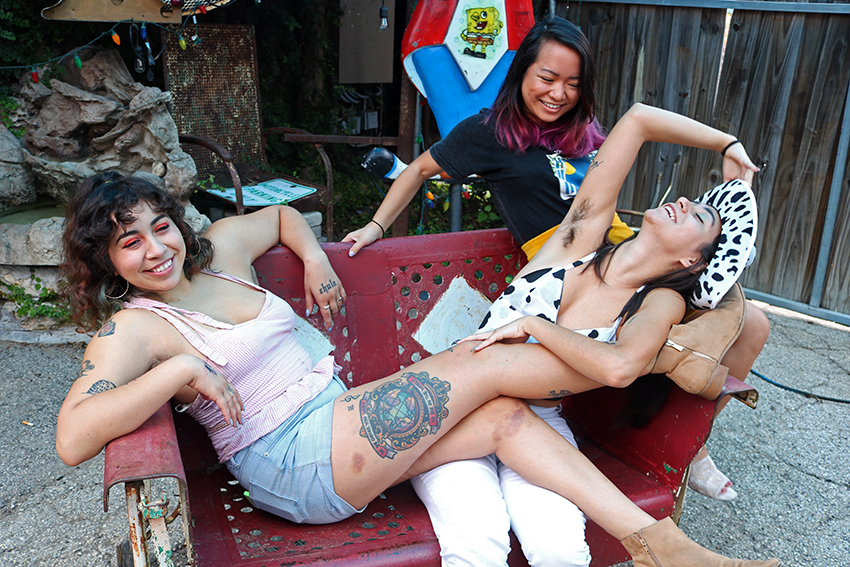 Howdy Gals, a concert booking troupe composed mostly of women of color, has begun its journey toward do-it-yourself domination with a distinct set of principles in mind: diversity and safety.

In the wake of the #MeToo and #TimesUp movements, Belicia Luevano, Kelly Ngo, Maya Van Os and Shannon Wiedemeyer envisioned a passion project challenging the prevalence of sexual harassment in the entertainment industry. Since its creation in December, Howdy Gals has relied on direct action to rid the local music community of abuses of power while enforcing the idea that women can lead the charge in influencing a music scene.

“Our goal is always to have safe spaces and diverse lineups, whether it be women or people of color,” Luevano said.

Howdy Gals’ vision comes at a time when women struggle to find a voice in the music industry. According to a study conducted by the Annenberg Inclusion Initiative, women make up only 22.4 percent of artists, 12.3 percent of songwriters and 2 percent of producers across 600 popular songs, a reality that has recently prompted a public conversation regarding female representation and safety behind the scenes.

Their motivation for advocacy stems from a place of personal familiarity. Prior to Howdy Gals, these women gained plenty of experience in an industry traditionally under  male dominion.

Van Os recounted the hardships she faced while working as the venue manager for a music-based co-op.

“People would try to intimidate me,” Van Os said. “And even when it came to getting assaulted by a man in the industry for a year and a half, I felt like I couldn’t speak up. I had to pretend I was friends with him in order to not be rejected by the music scene.”

The Gals believe these personal experiences are what make working with other women in local music a catalyst for progressive discussions and actions.

“We all listen to each other, we all take each other’s opinions seriously, and I feel I can voice whatever without being shut down,” Van Os said. “I can’t imagine that they’d be telling their male friend promoters about abusers.”

Jason McNeely, owner of Hotel Vegas and Barracuda since 1986, said the Howdy Gals are a refreshing addition to Austin’s music scene. They contribute to an environment composed of women in behind-the-scenes
positions that is unique to Austin, McNeely said.

“I think it’s fantastic that there’s an all-female collective, but they’re not alone,” McNeely said before listing off female bookers at venues such as Hotel Vegas, Empire, Barracuda, Cheer Up Charlies and Spider House.

While Howdy Gals and their supporters take pride in their crafts of advocacy and booking impressive lineups, the realities of abuse in the entertainment industry sit heavily in their hearts.

“I kind of personally have been getting a little bit overwhelmed by it,” Van Os said. “But knowing that people can be safe at our shows makes it worth it.”

On a wider scale, issues that inspired the #MeToo and #TimesUp movements are nowhere near resolved. Known abusers continue to thrive in the music industry.

“Find fellow female friends who you can support and find good ally men who stand up for you when no one else can,” Luevano said.