Tom Herman addresses Texas’ need for ‘A+ game’ against Oklahoma 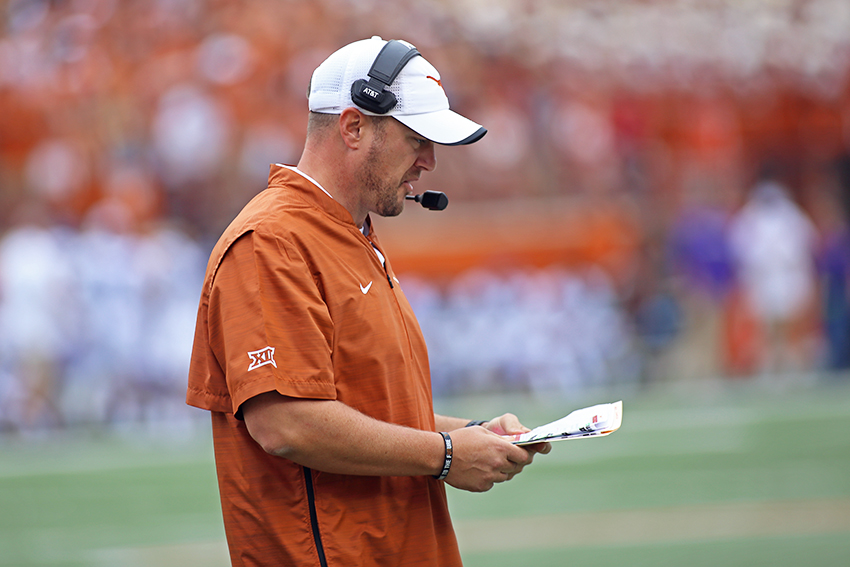 For the first time since 2012, the Longhorns and Sooners will face off as ranked opponents at the Cotton Bowl in Dallas, Texas. Head coach Tom Herman addressed the media on Monday ahead of the blockbuster matchup.

Here are some of the things Herman touched on during the press conference:

Despite the fact that Oklahoma lost former Heisman Trophy winner Baker Mayfield to the NFL Draft after last season, the Sooners have still remained explosive on the offensive end thanks in large part to the emergence of quarterback Kyler Murray.

The seventh-ranked Sooners are listed as 7.5-point favorites entering Saturday’s game, and though Texas has shown promise during its four-game winning streak, Herman acknowledged that the Longhorns must perform at their best in order to win.

“I think our best is really good,” Herman said. “We have to play our best in order to have a chance against elite teams in the country like Oklahoma.”

With the College GameDay crew on site and the atmosphere of the Texas State Fair on display, the stage is set for a game with big implications on the rest of the season.

Beck expecting to return this week

After offensive coordinator Tim Beck missed Texas’ road win over Kansas State on Saturday due to an infection, Herman announced that Beck is expected to be released from the hospital Monday afternoon and will return to the coaches’ offices that evening.

Herman said while Beck was in the hospital over the weekend, he’s continued to be involved in the team’s game planning from his computer. Beck is likely to return to coaching this week and make the trip to Dallas this weekend.

Through four weeks, Texas has seen a variety of runners get involved in the offense, but junior running back Kyle Porter hasn’t been one of the players receiving a large number of touches.

As a result, Porter has been contemplating taking a redshirt year in order to preserve a year of eligibility.

“I talked to Kyle and I wanted to make sure him and I were on the same page,” Herman said. “Kyle is contemplating redshirting this year, and that’s a decision that we support.”

Porter, who did not travel with the team to Kansas State on Saturday, has remained at practice with the team with Herman saying he’s “more than welcome” to remain playing on the team this season.

Porter has been in uniform during four games this season — the maximum number allowed during a redshirt season. In limited action, Porter has recorded one carry for a touchdown that came during the loss at Maryland.

“He’s been nothing but a do-right guy in every facet of his life ever since we’ve been here,” Herman said. “So we want to make sure we’re doing right by him, too.”