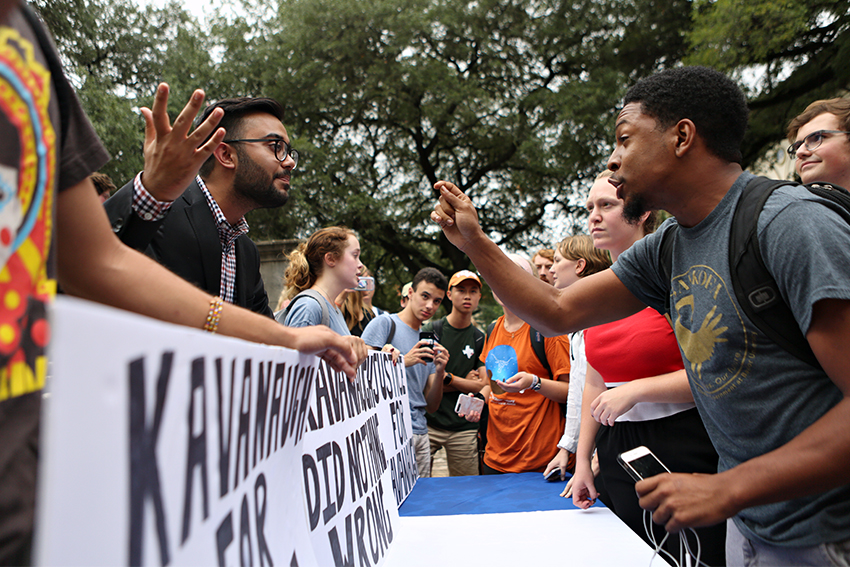 Holding signs saying “Kavanaugh did nothing wrong” and “Confirm Kavanaugh,” UT’s Young Conservatives of Texas chapter took to the West Mall on Tuesday morning in support of the confirmation of Supreme Court Justice nominee Brett Kavanaugh.

“We’re in support of Judge Kavanaugh because we believe that not enough evidence has been made to credibly accuse him and render him ineligible for the Supreme Court seat,” said YCT Chairman Saurabh Sharma, a biochemistry senior. “We believe that he should be confirmed speedily. This confirmation hearing has turned into a farce and is a process that has been leveraged by Democrats in order to deny constitutionalists a place on the court.”

Judge Kavanaugh testified in front of Congress last week after being accused of sexual assault by Christine Blasey Ford, a professor of psychology at Palo Alto University, and two other women, Julie Swetnick and Deborah Ramirez.

The Senate Judiciary Committee, which was supposed to vote on Kavanaugh’s confirmation Friday, chose to instead postpone the vote and initiate an FBI investigation into Ford’s allegations. The FBI is currently in the process of interviewing witnesses, according to the New York Times.

Within minutes of the YCT demonstration, a large crowd of 50 to 70 onlookers and counterprotesters gathered. After about an hour, protesters started ripping up some of YCT’s signs and yelling at YCT members.

“I’m walking over here and I see these inflammatory signs supporting Kavanaugh,” said Orlie Hernandez, an international relations senior and one of the protesters arguing against YCT. “They say, ‘Justice for Kavanaugh,’ but what about justice for Dr. Ford? What about justice for all the victims that have gone through sexual assault that don’t have the voice to stand up to power?”

“All of our students have a right to free expression, and the University takes that right very seriously,” Kennedy said. “Our main concern is about safety and that students have the right to express themselves.”

As the crowd grew, YCT were forced to relocate to the western steps of the Tower by Doug Garrard, UT’s senior associate dean of students. Despite UT officials and police trying to keep non-YCT affiliated students off of the steps, counterprotesters began surrounding the organization, chanting “We believe survivors” and holding signs reading “F— Kavanaugh” and “F— YCT.”

Not all students in the crowd surrounding YCT were against their position. Architecture graduate student Yasser El Masri said he agreed with the signs to some extent.

“I don’t agree with confirming Kavanaugh right now — let the investigation come out,” El Masri said. “If there’s any evidence against that guy, throw him in jail. I don’t care, but you need hard evidence. I don’t at any point doubt the integrity of her testimony, but this is the law. It doesn’t matter what you believe. It’s what you can prove.”

However, many students such as public relations junior Elizabeth Boone gathered to protest against YCT’s actions. Boone said the signs are indicative of wider problems at UT.

“It is despicable and wrong for people to be here trying to uplift a man who is clearly a perpetrator of assault,” Boone said. “It just really shows that even on a campus like this there are people who truly do not care about women, and they don’t care about people who have been assaulted.”