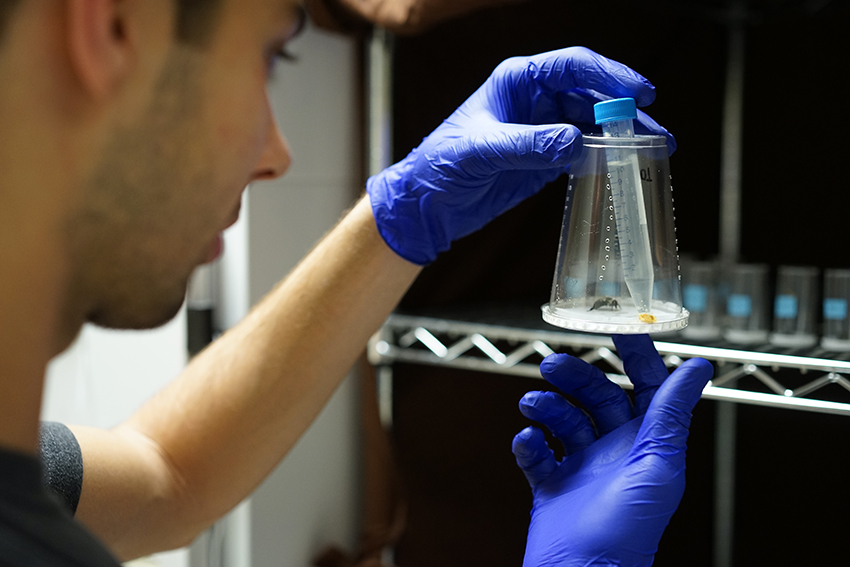 In order to protect the future of bees, we have to get into their guts, according to UT researchers. A UT study, published in the National Center for Biotechnology Information, uses microbiomes in bee guts to improve memory and association with threats in order to better preserve future bee populations.

“Currently, there’s a lot of health challenges that bees have,” Barrick added. “Bees are presented a lot of disruptions because of the pesticides, bacteria and transportation by humans … influencing their behavior and health in negative ways.”

Barrick added that their research could lead to antibiotics for bees which would make them more resistant toward pathogens and chemicals.

“We were genetically engineering bacteria, which has never been done before … in order to affect behavior,” said Moran.

To improve bee memory, the team created bacteria capable of interfering with the production of dopamine, or the chemical associated with pleasure, in the bee’s guts. Barrick said he helped grow and modify the bacteria found in bees’ guts and later reintroduced them back into bees lacking bacteria. Humans and bees both require hosts to develop the microbiome in their gut.

This was a key aspect for conducting such research, because these gut microbiomes are passed down from host to host in the population, according to Moran.

“Changing the level of the dopamine in the bee can affect learning in a positive or negative direction,” Moran said. “It’s known from other work that dopamine is involved in learning. The bee can learn to associate a scent that they detect with its antenna as good or bad.”

Moran said after engineering the gut bacteria to produce more dopamine, very mild electric shocks were induced on the bees, while giving it a scent in order to teach the bees to associate the smell with the experience. The experiment was successful in making the bees learn that information, because after doing the electric shocks for some time, the bees would react automatically to the scent — without even being shocked — by putting the stinger up, according to Moran.

Thinking of bacteria as a benefit, not just as a threat, is key to the future of bee populations that preserve our crops, she added.

“Bacteria in the bee gut help the bee, but they are also kind of at war with each other … they make toxins to kill each other,” Moran said. “Some of the research (of the bacteria) is used to help the bee survive … making them smarter. We can make these bees better with bacteria – better pollinators.”