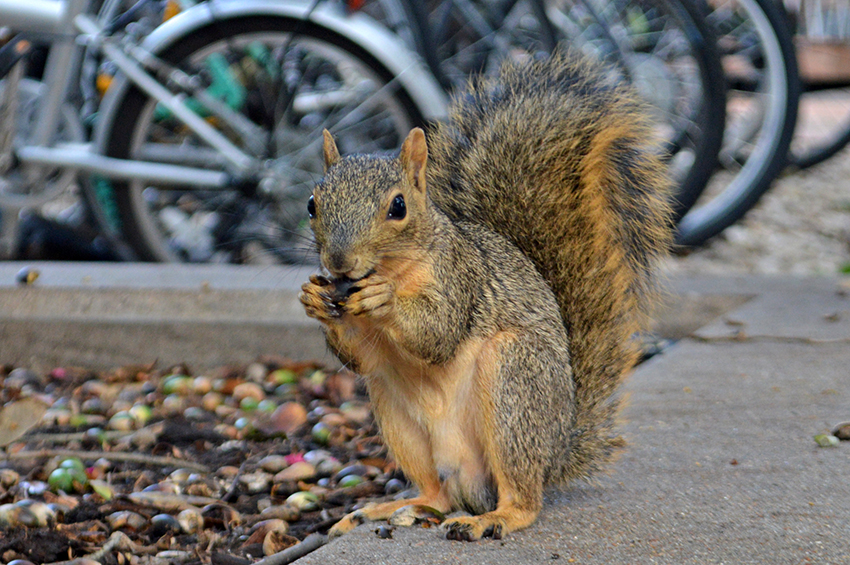 Any regular to the SAC knows that UT squirrels are widespread and bold enough to swipe your Chick-fil-A fries. Whether you think these squirrely friends are an amusement or an annoyance, UT researchers are finding use in them as a behavioral study.

Assistant anthropology professor Aaron Sandel is studying how squirrels on campus behave differently around humans than do squirrels in other areas. Sandel said he will evaluate squirrel behavioral evolution or how individual behaviors inform evolutionary advantages, according to Nature.

Sandel completed a similar project at the University of Michigan and said he expects to replicate his results with new squirrels and students in Austin.

“If a similar pattern emerges where campus squirrels are more tolerant around people than off-campus squirrels, then that’s evidence that it’s the ‘campus effect’ rather than some other factor,” Sandel said.

One measure of human tolerance is flight initiation distance, or the closest distance a human can get to an animal before it runs away, according to Sandel.

“With campus squirrels, especially ones where they have such a history of being fed by people … rather than running away, at Michigan at least, the campus squirrels would see a person sometimes and start running toward them,” Sandel said.

Sandel said he suspects squirrels might be self-domesticating, or able to adapt to become more tolerant to humans without active human intervention. In addition to tolerance, he said he is interested in complex cognition, or critical thinking skills according to ResearchGate. He added that squirrels demonstrate complex cognition when they do things like bury a nut. Not only does this prevent other squirrels from stealing their nut, but they can distinguish between their nut and other buried nuts.

Sandel’s focus on squirrels might come as a surprise given his background in primatology, but he said they are ideal study subjects.

“They’re interesting because they have a lifestyle that’s very similar to primates,” Sandel said. “But they don’t have the traits of primates.”

Sandel added that squirrels are a best kept secret to behavioral evolution research since they have many practical advantages over primates. He added that one of these advantages is squirrels have shorter life cycles, which allows researchers to study populations across generations more easily.

This accessibility allows undergraduates, such as anthropology senior Riley Derby — who is working with Sandel on the project — the chance to gain animal behavior research experience. He said he hopes to study primates like Sandel in the future. In the meantime, Derby can be found in corners of campus collecting data on squirrels. More undergraduates will be added to the project when it formally launches next spring.

“I plan to do exactly what Dr. Sandel is doing,” Derby said.

Students might not be able to predict the next move a campus squirrel makes, but they can expect to hear a lot more about them from researchers such as Sandel.