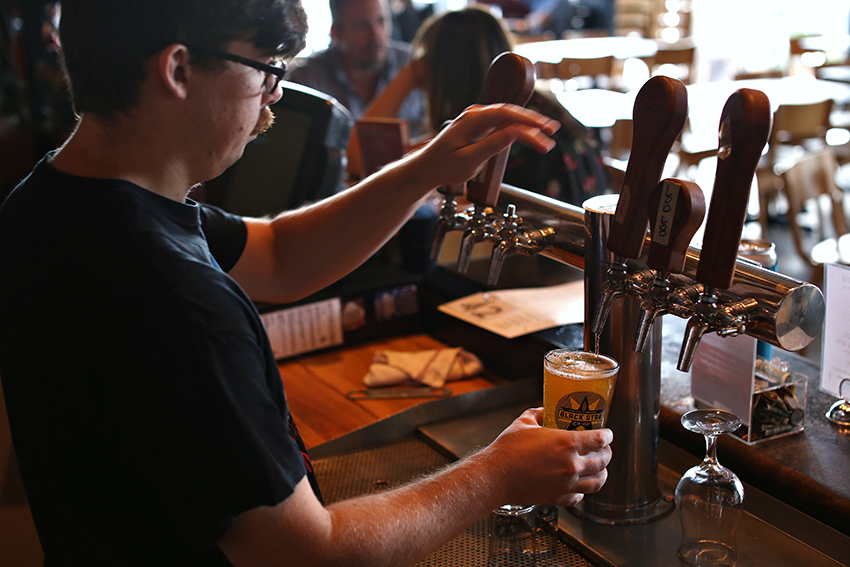 Few businesses can sincerely claim to be community first, but Austin’s own Black Star Co-op does just that.

Located at the intersection of Lamar and Airport Blvd., Black Star Co-op is the world’s first cooperatively owned and worker self-managed brew pub. The local business is known for its creatively brewed beers, vegetarian-friendly menu and unique business model.

Black Star is cooperatively owned by members of the community who pay for a share of ownership and elect a board of directors. Black Star also has a worker’s assembly that makes up the kitchen, pub, beer and business teams. Each team within the worker’s assembly elects its own manager and operates autonomously.

Beth Beutel, president of Black Star’s Board of Directors, said that the cooperatively owned and worker self-managed structure of Black Star allows it be more than just a brewpub.

“(Black Star is) a business that reflects values of the community and that builds value for the community,” Beutel said. “Black Star Co-op leads in the creation of a world with inspired craft beer, a thriving cooperative community, a resilient food system and a just society.”

Beutel said that treating the employees at Black Star with utmost appreciation is a major part of contributing to the community.

“We’ve strived to pay a living wage, we have a worker self-governance model, and those are things that, I think, lead to a world that is more just,” Beutel said.

Roderick Morales, a member of the worker’s assembly on the pub and business teams, says that this availability for self-governance is behind his devotion to Black Star.

“I love the fact that there is really no owner to report to that is a singular person. We’re all going to work together. We’re all going to make things happen,” Morales said. “I love that if I have an idea I can figure out a plan on how to do it and we can make it happen. I have a voice here. That really means a lot to me and that’s what keeps me here.”

But paying high wages and producing locally sourced, high quality food comes with a steep price from a business standpoint. Margins in the restaurant industry are tight even without the extra pay and food quality.

Christopher Byram, assistant brewer and board staff liaison, said that Black Star experienced the effects of narrow margins in the past and the Austin community came to the rescue.

“We saw in January 2017 that we were in a pretty tight cash position and appealed to our member owners for support,” Byram said. “It became a citywide rescue plan. We had a huge amount of people come out here and give us a lot of support.”

Now, Byram says Black Star is experiencing more consistent profit. The restaurant industry continues to be difficult to maneuver, but Black Star has experienced two quarters of profit, more than they’ve seen in a number of years.

Looking forward, the brewpub is hosting a watch party for the debate between Sen. Ted Cruz and Congressman Beto O’Rourke on Oct. 16. They are also hosting a benefit release for a house beer on Oct. 10 during which $1 from each pint sold will be donated to Habitat for Humanity and used to build a house for a local family.