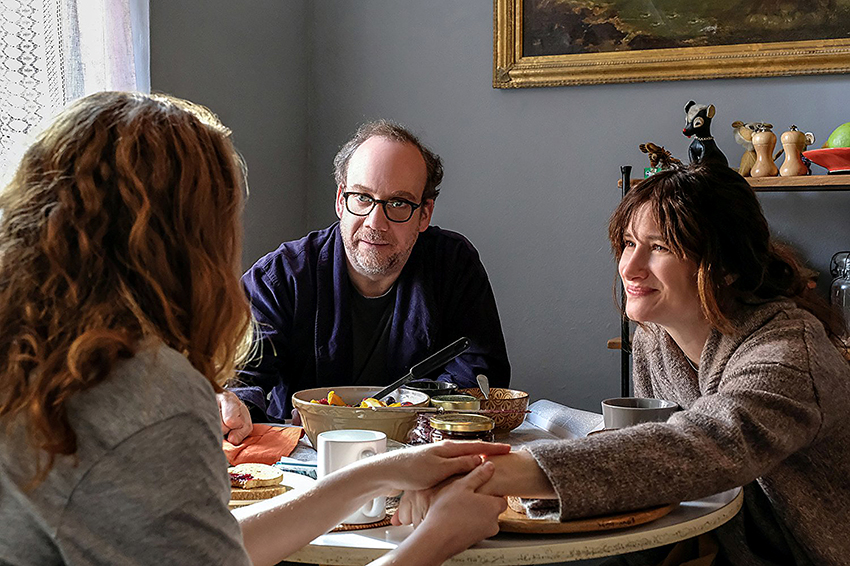 “Private Life” is an intimate, personal and well-made film that brilliantly tells the emotional story of a married couple’s journey to parenthood.

The Netflix original film tells the story of a married couple, Richard (Paul Giamatti) and Rachel (Kathryn Hahn), who face great emotional struggles as they do everything they can to fulfill their dream of having a baby. However, once more people get involved in their journey, the emotions get messier.

No other film released this year feels like such a personal story. The first scene brilliantly shows that Rachel and Richard’s desire to have a baby has completely taken over every other aspect of their life. The scene is framed to be a sex scene, but director Tamara Jenkins surprises audiences with the realization that the scene is not sexual at all, but in reality, is showing Richard give Rachel an IVF shot.

While the plot might seem simple, following the married couple on their struggle to have a child becomes an emotionally brutal experience. While all the film’s scenes are small and simple on its surface, that does not take away from how riveting they are. Most films on this scale have significant chunks of seemingly unimportant events. However, each scene in “Private Life” has such heavy amounts of emotional force that one cannot help but be on the edge of their seat the entire time. The scenes excel because the stakes for Richard and Rachel are so high, and Jenkins brilliantly weaves this through every single encounter they have with each other and other characters.

On top of being one of the most emotionally draining films of the year, it is also one of the funniest, and its humor enters through the raw authenticity. There is so much comedy that rises through the small, real-life moments which add to the weight of the overall film. While funny in the moment, each little detail adds so much more to the characters that make the ending so powerful.

Perhaps no ending of a recent film will leave the viewer with such a nervous feeling as the ending of “Private Life.” After the rollercoaster of emotions through the entire film, the final scene is one of the most vulnerable of the movie and will put butterflies in almost anybody’s stomach. Each scene came together to show what having a child meant to these characters and what they have gone through to have one, giving the viewer an emotional punch in the gut.

Finally, the performances make the film. Giamatti, Kayli Carter and Molly Shannon are all fantastic in the film, but at the end of the day, “Private Life” serves as a showcase for Hahn’s enormous talent. Hahn might give the year’s best performance as she truly gives it her all.

In the end, “Private Life” is a masterpiece in intimacy. No film of 2018 will match its authenticity. Tamara Jenkins, Kathryn Hahn, and the rest of the cast and crew created an emotionally brutal film, proving that simple can be breathtakingly effective.