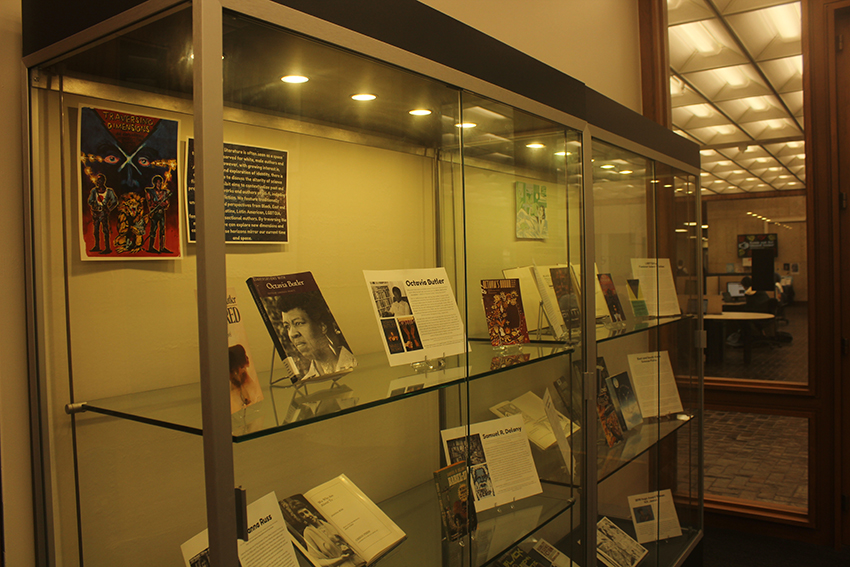 While science fiction is full of green martians and blue Avatars, the protagonists are almost always the same color: white. On top of this, representation of female and LGBTQ main characters is lacking even in the modern day. Despite this, graduate research assistant Adriana Casarez said there’s hope for more diversity in the future.

In the past, white male protagonists were preferred over those of different ethnicities because the American audience was predominantly white, Casarez said.

Casarez curated an exhibit on the subject called “Traversing Dimensions: An Exploration of Diversity in Science Fiction,” which is on display at the PCL throughout October. Lack of representation in science fiction stories made the audience feel like the narratives were trapped in the same whitewashed “dimension,” hence the name of the exhibition, Casarez said.

The exhibit features a collection of science fiction works by modern American minority writers. There, you can discover genres such as Afrofuturism, or science fiction stories that reimagine the future through the perspective of African Americans.

Casarez said that today, science fiction has evolved to engage a wider range of audiences. For example, Octavia Butler, a Californian science fiction and Afrofuturist writer, has won multiple awards for her works. Her latest novel “Kindred” is about a black woman who travels back in time to the pre-Civil War South, according to her website.

But writers such as Butler who have published through the decades have experienced serious issues with representation even in their own work, Casarez said. For example, the publishers of Butler’s 1976 book “Patternmaster” whitewashed characters on her book cover. While they later changed the cover to better represent the characters, it still represented an ancient ideology in science fiction that pervades today’s culture, Casarez said.

“The two main characters, (who are black), clearly have Caucasian features — they’re just tanned a little bit … just like white men with tans,” Casarez said. “Butler had no control over that. It’s problematic.”

“I think diversity is without a doubt one of the most critical parts of science fiction,” Blackwell said. “There are always thousands of alien species meant to represent diversity in the universe … (but) I think it depends on the book or movie that you are looking at.”

Like Spock beaming into another dimension via the transporter, science fiction storytelling is also traveling through space and time into a more diverse place, into another “dimension,” Casarez said.

“We’re going somewhere new,” Casarez said. “(We are) traversing dimensions … crossing over into a new place where we’re talking about these stories that are overlooked.”