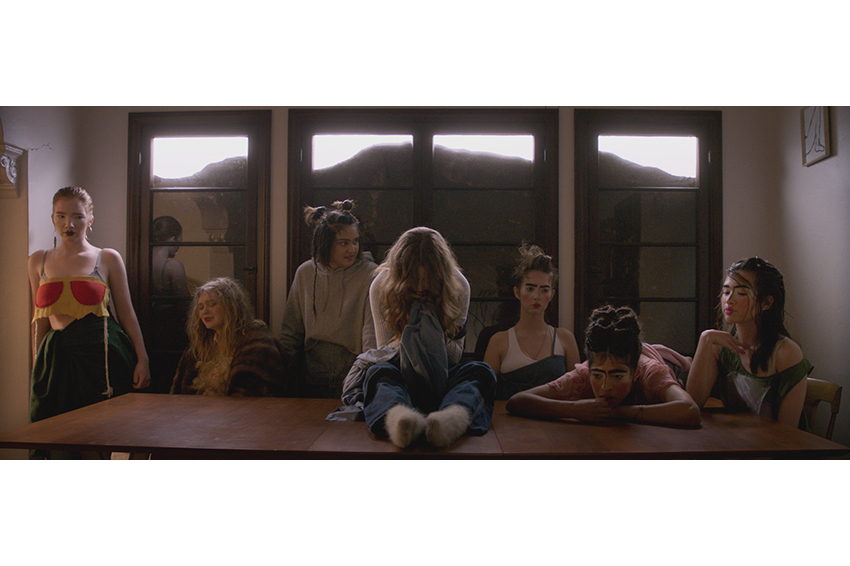 During a birthday party, eight girls are barricaded inside for a seemingly endless sleepover. As cliques form and the whereabouts of a suspicious character called The Man remain unknown, their collective sanity slowly falls apart.

The Daily Texan sat down with Kramer after the world premiere at Fantastic Fest to talk more about “Ladyworld.”

The Daily Texan: What do you love most about making movies?

Amanda Kramer: The short of it is just being with actors. It’s the most enriching aspect of the experience because … when you write a character and it lives inside of your head, it’s essentially your ego and your brain … It’s an endless possibility, and you cast someone and all the possibilities end. Then, it’s just a physical human being sitting in front of you, and that is freeing, terrifying and magical, and everything that exists coming from that person is so personal to them and so they steal from you. It’s a total loss, but then it’s … (an) incredible journey because then all of a sudden, it’s not yours anymore. You’re watching your character walk around … and it’s the most artistically satisfying and epic thing.

DT: How was the concept of “Ladyworld” conceived?

AK: The idea came very fast. You know, you wake up from a dream and you’re like, “Huh.” (laughs) What if I destroy eight people’s lives by trapping them in a house together? It sounds fun. You get these ideas pretty quickly, and then creating the full arc takes years. I wrote the script for a long time with my co-writer (Benjamin Shearn), and we went from draft to draft. And in different drafts, different things happened and different characters seemed like leads and … others like supporting cast, and that all shifts over time. Even though the idea came quickly … it took a minute to understand what that would look like … and how they would represent different aspects of the female psyche.

DT: What was it like tapping into that darkness and bringing it out for the movie?

AK: I love women, and I love being a woman. I love being friends … with women, but it’s complicated. Women are complimenting each other and yet digging each other, … so it’s very easy to step into that mindset very quickly. We’re a competitive people and gender. Our desire to fit in is just exhausting, so immediately, I could remember a teenager (snaps) like that, and it was half my life ago. I can still step into those feelings and into that darkness, and in that phase of your life, your best friend knows how to hurt you the most. There’s always a tension there. That she might turn on you, expose you, and she’s the holder of your secrets. It’s a tremendously frightening, teetering type of relationship, and if you put that in a group dynamic, adding more women to that, it teeters even more. The fragility there is easy to remember — an immediate sensation. I was like, “I’m there!” (laughs) And then being an adult woman, you have the same kind of competition. There are friendships that uphold you and uplift you, yet are also treacherous.

DT: Another dark element of the film is The Man. Could you talk about how it taps into female paranoia, and how The Man plays into our culture now?

AK: When I first started writing (“Ladyworld”), I really wanted to talk about rape phobia, and this was before the movement we’re in now. I was writing in a time where this stuff was … not really discussed. It’s an intrinsically female thing to know that you are in danger. That was so important to get into the film because it’s not often spoken of. We see films where women are victimized or sexually assaulted, but what if it was just a hint of a sexual assault, which is every day, all day long? So, people should discuss that more because it’s another loss of innocence. It’s the understanding that you’re a sexualized being to a potential predator. I think as women, we’re born not knowing that, and then at a certain age we know that, and we never go back. You’re conscious for the first time that you could be really hurt, and I just definitely wanted to talk about that.

DT: “Ladyworld” just had its world premiere. What was it like to finally see it here at Fantastic Fest?

AK: Absolutely crazy … I’ve seen it so many times that it’s mind-numbing, so my mind starts to wander … but in the sense that I’m in a room, and I can feel the palpable energy of human eyes watching it. It’s the most exciting thing, and what a thrill to be doing it at a film festival where people love weird films, and in a city where people are weird people and outsiders are really banded together. Showing in Austin is the best. This is a great place to show movies because people want to watch movies, so the prevailing emotion yesterday was I’m so lucky to be with an audience this vibrant and this willing to go on such a strange journey with me.