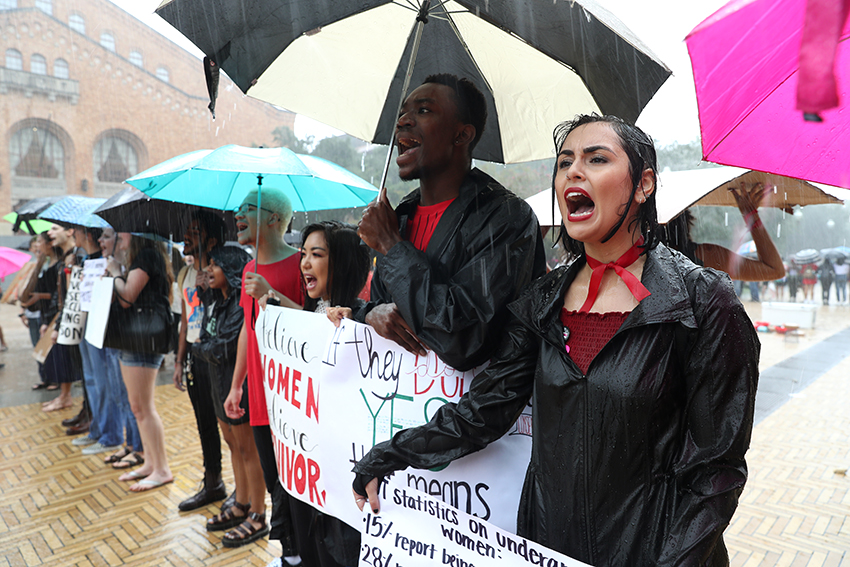 With arms linked and tears in their eyes, dozens of people continued their chants of “We believe survivors” and “Survivors united will never be divided” Tuesday afternoon on Speedway.

During the Stand with Survivors rally, attendees provided resources for sexual assault survivors, gave tips for navigating campus as a survivor and emphasized ways to engage in self-care. In between engaging in chants, survivors and invited speakers also shared their stories of their sexual assault and the struggles of organizing.

After the Young Conservatives of Texas demonstrated in support of the confirmation of then-Supreme Court Justice nominee Brett Kavanaugh last week, rally co-organizer Sarah Kerr said she wanted to create an event to support the UT community of sexual assault survivors.

“I thought if we didn't respond, and if we didn’t do something pretty fast, people are just going to think that the harm that was caused this week is just going to go unhealed,” international relations sophomore Kerr said. “We wanted to respond and show that we're going to fight back but also show that survivors on campus deserve to feel safe.”

Rally co-organizer Angel Bierce helped rally attendees form human blockade barriers on both sides of Speedway, forcing students on the street to walk around the protestors on their way to class. Bierce said they wanted to be inconvenient because sexual assault is inconvenient.

“UT needs to see that people on this campus feel silenced,” said Kaci Pelias, a theater and dance junior. “Everyone on campus needs to feel safe, especially survivors. This shouldn’t be a partisan issue.”

According to the UT System’s 2017 Cultivating Learning and Safe Environments report, 15 percent of female undergraduates at UT-Austin have been sexually assaulted since enrollment. English freshman Luisiana Cortez said she was concerned about sexual assault on campus and brought a sign to the protest which said, “Make this campus safe for queer survivors of color.”

“There are a lot of problems on this campus having to do with blaming the victim and sexual assault, Cortez said. “We need to pay attention to it and talk about it. There are a lot of survivors who are afraid to come out and report their abuse.”

Interpersonal Violence Peer Support, Voices against Violence and the Title IX Office also hosted booths at the rally. While the rally organizers did not associate themselves with any campus organizations in an effort to be more inclusive, Kerr said she appreciated the helpful resources they offered for survivors to heal and connect with others.

“There's so many people at the event who are survivors and allies of survivors,” Kerr said. “We hope that everyone walks away feeling even a tiny bit healed and aware of the places they can go if they ever need it.”

Bierce said she hopes the rally sends the message to survivors that the UT student community is standing with them, believes them and is going to fight for them.

“If we helped to heal one person from this rally, it would be a success in our minds,” Bierce said. “We want to gain the support of the community and just let survivors know that we are a majority on campus.”